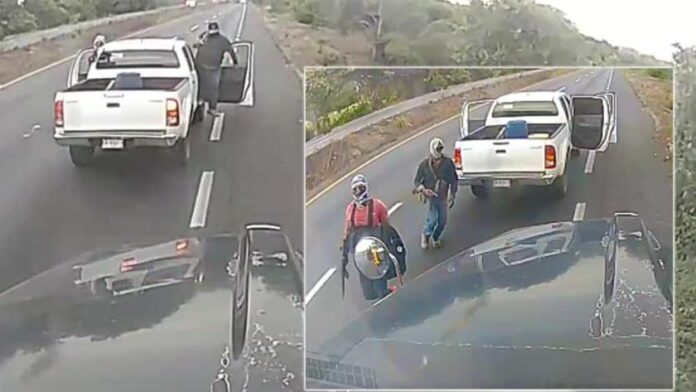 Criminals traveling in a truck forced a trailer to stop and lowered the driver of the unit in the municipality of Tierra Blanca.

Moments of tension were recorded by the security camera of a cargo trailer, which was intercepted and detained by a group of armed individuals who threatened the driver while he was driving on the Minatitlán-Córdoba highway.

According to the video data, the incident occurred on Tuesday, April 26 at 6:07 p.m., on this highway near the town of La Amapola in the municipality of Tierra Blanca.

In the video, it is observed that a white pickup truck passes the cargo unit, while a subject opens the door on the passenger side from where he points an assault rifle towards the cabin of the trailer and makes a stop sign.

The heavy unit slows down and stops, while the truck stops meters ahead. Immediately the subject who pointed the rifle gets out, as do two other heavily armed men.

The criminals approach the vehicle, and through the interior camera of the trailer, it is observed that one of them entered the cabin and said something to the driver, which is not heard because the video was not recorded with audio.

The driver was removed from the unit, and with the front camera it is observed that the men lead him to the truck where the criminals were traveling, however, the recording ends at that point.

So far it is unknown if the crime in question was a kidnapping or theft of the unit, however, through a tweet, the National Guard channeled the case to the security station of the municipality of Cosamaloapan.