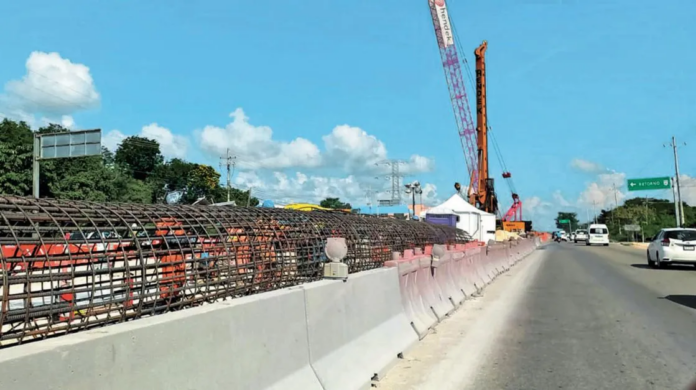 PLAYA DEL CARMEN.- The Mayan Train route will no longer enter Playa del Carmen, Quintana Roo and will not be elevated either. Today, Javier May Rodríguez, director of Fonatur, confirmed that the work will have a new line in section 5, from Cancún to Playa del Carmen. Now it will be parallel to the road and at ground level.

The last modification is in Section 5 north, which implies the suspension of work at the height of Playa del Carmen where an elevated boulevard that would cross the urban sprawl was being built for more than two months.

At a press conference from the offices of the Mayan Train in Cancun, May Rodríguez was accompanied by the Secretary of Agrarian, Territorial and Urban  Development (Sedatu), Román Meyer Falcón. Both reported that after a work meeting, the decision was made not to affect the urban area of ​​Solidaridad (Playa del Carmen), despite the progress of the works in that area.

The head of the National Fund for the Promotion of Tourism explained that there was a meeting today at seven in the morning with  President Andrés Manuel López Obrador and the companies involved. There it was decided that the Mayan Train should no longer be elevated at any point, in order to complete this work on time, in July 2023. This would also avoid affecting vehicular traffic, said the federal official.

When mentioning the existence of works still underway in Playa del Carmen, in addition to the removal of the trees, the director of Fonatur pointed out that these works will have to be suspended. He denied that the works were “in vain”.

May Rodríguez insisted that the decision was made to complete the Mayan Train route on time. Raising the train required many soil surveys and other time-consuming considerations.

Román Meyer Falcón, for his part, rejected that the publication of the expropriation decree, carried out in recent days, is intended to affect people, since most of them will be “concerted” processes between both parties.

In addition to the change in the layout of the train, the head of Fonatur yesterday, January 19, announced that the lands of three municipalities of Quintana Roo, (Solidaridad, Puerto Morelos, and Cancún) included in the Declaration of Public Utility released last Monday in the Official Gazette of the Federation (DOF) for their possible expropriation, they will be valued by the Institute of Administration and Appraisals of National Assets (Indaabin) and under these terms, the payment to their owners will be negotiated.

The official assured that it is false that this procedure is going to be carried out without consulting the citizens, in addition to the fact that after his appointment as head of the project, it begins with a “very practical stage,” with the aim of completing the entire circuit. railway no longer at the end of 2023, but in July 2023, which is when they will begin to receive the first trains built by Alstom.

Although he asserted that there is an agreement with the majority of the owners of these lands, a large part of them hoteliers, the Indaabin’s valuation could be a source of disagreement.

Yesterday’s conference was attended by the head of the Secretariat for Agrarian, Territorial and Urban Development (Sedatu), Román Meyer Falcón, who explained that what was published last Monday in the DOF is only the beginning of an administrative procedure that will not necessarily end with the expropriation of the 198 properties that are included in the Declaration of Public Utility.

“This is due to the fact that many of the properties that were notified have encumbrances and the only way to be able to resolve this issue quickly and agilely is through a ‘concerted’ expropriation, so we reiterate that it is the beginning of an administrative process; it is not a process of final definition that all the properties are going to be affected”, explained the official.

There are 198 properties that were included in this decree, in the first notification, but not all of them will be brought to its conclusion. In the next few days, a process of photographic studies will begin, to avoid affecting urban areas as much as possible, said the official.

The bodies of 8 people reported missing found in Yucatan ranch