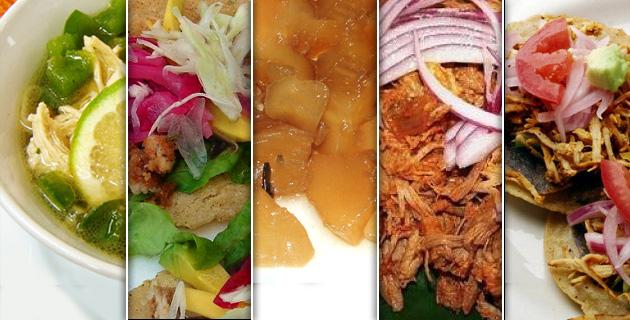 Yucatecan gastronomy is simply surprising, with the frequent use of seasonings and ingredients from the area, it has become over the years one of the favorites of foreigners and locals. Something very peculiar happens in Yucatecan homes since some of the most popular dishes are already a tradition to be prepared on specific days, although that does not limit us to eating them on different days.

It is a tradition in Yucatecan homes to get up early every Sunday to make long lines in the corners of their colonies to enjoy an exceptional breakfast, the cochinita pibil, preferably served in tacos or cakes, but it is also sold by the kilo. It is pork meat seasoned with achiote and other spices, accompanied by a sauce of purple onion in very small squares soaked in sour orange and pieces of habanero pepper.

On Mondays, Yucatecan households enjoy a combination of pork dipped in bean broth and bean seeds, served with tomato sauce, chopped onion, a few slices of radish, coriander, habanero pepper, tortilla, and lemon. The combination of all these flavors results in a tasty dish that you should not miss.

One of the most popular stews in Yucatan is Poc-Chuc, it is pork meat cut into small pieces accompanied by slices of radish, onion, blended tomato, coriander, and a touch of sour orange, which will be the element that will give you a taste without comparison and clear, handmade tortillas. The town of Maní is famous for making Poc-Chuc its specialty.

The regional treat par excellence in Yucatan is undoubtedly the Panucho, crunchy tortillas stuffed with bean paste, added on top with chicken or turkey meat, onion strips, slices of avocado, tomato, lettuce leaves, and a spicy sauce made with habanero chili, which you should definitely not forget to try. It is very common to find them on Saturday nights on the tables of the Yucatecans, but they are also observed in breakfasts and even lunches.

Although Dutch cheese is not typical of this area, the Yucatecans have adopted it for many years; When the city was colonized, it adopted many European elements and adapted them to its way of life, including part of the gastronomy, thus, this cheese is known in these lands as “ball cheese” and it is prepared with a broth made with harina and masa, called “cabbage” and stuffed with ground beef mixed with olives and raisins. It is served with a tomato and onion sauce.

Another of the most used elements in Yucatecan cuisine is toasted and ground pumpkin seed, named by the Yucatecans as “ground pepita”, with it delicious dishes are prepared, such as papadzules, tacos stuffed with boiled egg and bathed in a sauce. ground seed and tomato. The result is delicious, in most of the traditional food restaurants, they are prepared with handmade tortillas at the time of ordering, without a doubt a great experience.

Evenings in the Yucatan are best enjoyed with a bowl of lime soup for dinner, although the lime is not the main ingredient it is undoubtedly what gives it the exceptional flavor. It is a chicken soup with toasted tortilla strips accompanied by a few drops of sour lime and habanero pepper, very similar to turkey broth but with a different touch since the lime is a bit less sour than the lemon.

Very similar to panuchos, salbutes are one of the favorites in Yucatán, unlike panuchos, they do not have beans, they only have as a base a tortilla made with corn dough, on top they are accompanied by lettuce, meat from chicken or turkey, tomato, onion, avocado and if desired, habanero pepper sauce. Very popular on Saturday nights.