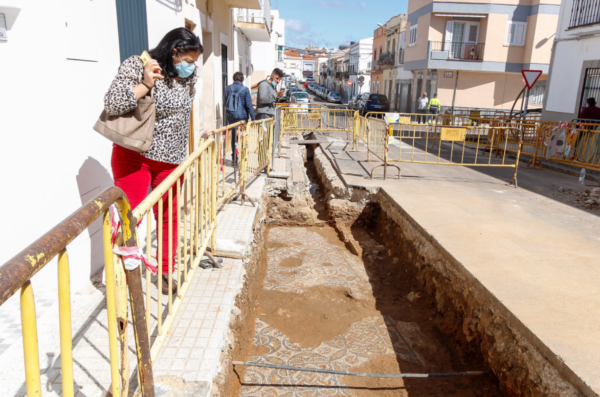 The discovery of some mosaics in the streets of Mérida (Spain) generated a controversy; but it went viral in a few hours, due to the confusion of several Yucatecan Internet users.

From the page of the Mérida City Council, of the aforementioned European city; The discovery of these mosaics, which takes place during the works carried out for the gas connections, was shared. In fact, this geometric decoration is reported to date from the 3rd or early 4th century AD.

The publication is accompanied by several images of fences that protect the discovery, while several walkers are seen.

However, due to the constructions that surround the site, many Yucatecans fell into “the trap” that the discovery had taken place in Mérida, Yucatán (Mexico)

It is pertinent to remember that in the world there are three cities named Mérida that share the Spanish language: one is precisely Spanish; another is Mexican and one more Venezuelan, but there is also a fourth Mérida in the Philippines.

According to Sin Embargo, that of Spain is also known as Extremadura and is the oldest of all and has a Roman past when it was Augusta Emerita and capital of the province of Lusitania; which is still very much alive today thanks to its theater, its amphitheater, its bridge, its circus, its temples and the remains of some other houses that have come to light.

Perhaps that is why the discovery of these mosaics is not a surprise for many Spaniards, which raised awareness for preservation, which, however, many consider will not happen and that surely some pieces of the discovery will be removed to be presented in a museum.

As for Mérida, Yucatán; It was founded in the Mayan city of T’Hó. The story tells that several of the conquerors of this land were from Mérida, and the stones of the half-demolished Mayan buildings reminded them of the Roman ruins of Mérida, it was decided to give it the same name as the Extremaduran city.

As for Mérida (Venezuela), its foundation dates back to 1558 and was named after Juan Rodríguez Suárez, a natural Spanish conqueror of Mérida Extremadura who toured the territories of present-day Venezuela and Colombia.

The city of Mérida, in Venezuela, boasts you have the highest and longest cable car in the world. Reference photo

The one in Venezuela, in addition to being a university city, boasts the Mukumbari, the highest cable car in the world and the second-longest.

Mérida of the Philippines, the youngest of the ” sister ” cities

Finally, the Mérida of the Philippines is the youngest of all. Its foundation dates from 1857 by Domingo Fernández Ember, governor of the province of Leyte, precisely in memory of his native Mérida (Spain).