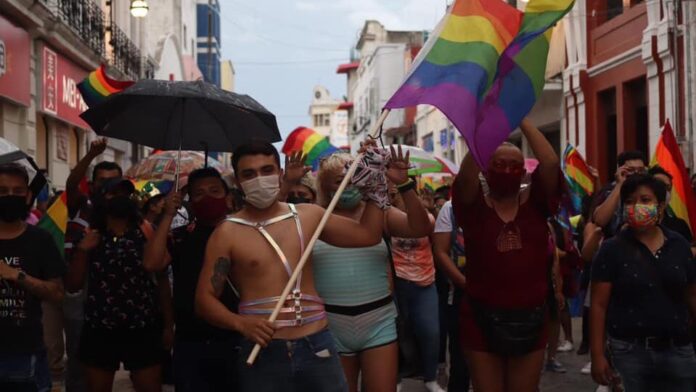 The “Great March of Sexual Diversity Mérida 2021” gathered thousands of people in the Plaza Grande of Mérida.

Flags, many multicolored flags. People, also a lot. More than half of 60th Street between 61 and 63, right in front of the Cathedral, with people listening to the speech of activists for the rights of the LGBT community and against acts of discrimination.

The reason for the meeting: the “Great March of Sexual Diversity Merida 2021”. Thus, this afternoon the Yucatecan capital was one more venue of the demonstrations that today were held around the world as part of gay pride month.

The contingent left shortly after 5 pm from La Mejorada Park, at the corner of 59 and 50. Right there is now a pedestrian crossing painted with the colors of the rainbow, that which yesterday was “intervened” as part of a citizens’ initiative and with the support of the Road Services area of the Police of Mérida.

Rainbow flags, of all sizes. So small that they fit in one hand or so large that they were worn as a cape or held between several people. There was even multicolor on the covers, an addition that joined the contingent this year, after last year’s march was not held in person due to the pandemic.

Batucada, zanqueros and festive atmosphere accompanied the contingent, which advanced along 50th Street, then on 65th Street and finally on 60th Street to reach settling in the Plaza Grande.

Among the attendees, couples holding hands, several with equal clothes or groups with common badges. There were drag queens whose dresses and wigs highlighted the contingent. Also transformists with gala costumes.

There were children, mothers supporting their children or multi-member families, although the bulk of the contingent were young people. There was no shortage of people who stopped their daily walk through the center of Merida to observe the demonstrators and their attire. There were also those who broadcast the event live and others who took the opportunity to take photos or interview creators of digital content such as Gwabir, the Yucatecan Gabriel Wabi, or Marpi Jiménez, “Britany Yahaira”. The latter led the contingent wearing a multicolored band.

There was no healthy distance. Cover-ups yes, many; some masks. The voice in the sound said that there were at least two thousand people gathered, perhaps more. Multicolored flags, many.