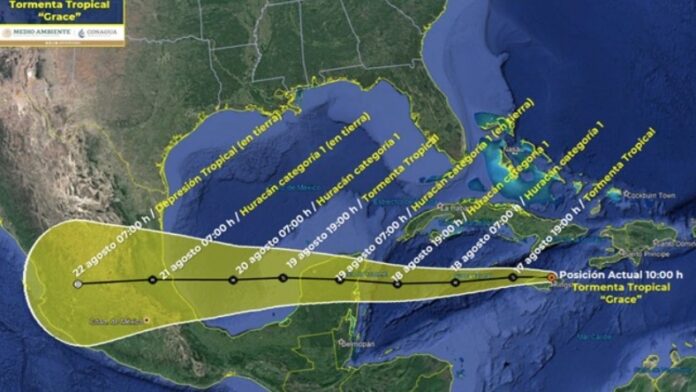 The National Oceanic and Atmospheric Administration -NOAA- establishes in its projections, the wide scope of this system that continues to intensify in the Atlantic

Mexico. – The projections for the tropical storm “Grace” active in the Atlantic and close to making landfall in Jamaica  will have significant effects in Mexico where it is expected to impact not once, but twice, in addition to its extensive remnants reaching the other extreme of the country, on the Pacific coast.

The National Meteorological Service highlights that the system is located 1,095 km east-southeast of the coasts of Cancun, Quintana Roo and moves west at 24 km / h; It is expected to affect the Yucatan Peninsula as of Wednesday, so it remains under surveillance.

From there it will cross practically the entire Mexican territory through the center and west and its remnants will reach the coasts of the Mexican Pacific, between Michoacán, Colima, Jalisco, Nayarit and southern Sinaloa, this towards August 22.

As “Grace” moves in a dominant direction to the west, it is likely that it will intensify to a tropical storm this Tuesday, the 17th near Jamaica; on Wednesday 18 he would be crossing the Cayman Islands to the south of Cuba and could be close to Cozumel and the coasts of Quintana Roo during that same night. In the course of Thursday 19, everything indicates that it will cross the north of Quintana Roo and Yucatán with gusts of wind greater than 70 km / h and rains that generate accumulated 70-150 mm without ruling out locally greater with potential floods, falling trees / branches and electricity cuts, highlights the Meteored.mx service

The alert is generated since this still storm could generate storm and hurricane effects in states of the southeast and east of Mexico, so it is time to take preventive measures.

The climate measurement agency also indicates that towards the afternoon of Thursday and during Friday, the cyclone would maintain the category of storm with the probability of rapidly intensifying to a hurricane once it moves over the Gulf of Mexico.

It emphasizes that the current assemblages and trajectories indicate that Grace could make landfall again between Friday 20 to Saturday 21 at some point in Tamaulipas and Veracruz, being for now the most likely in its border area. This still has a margin of error, and can move further north or south, as well as varying its intensity, but it is time for the population in the region to be awaiting updates.

It is important to mention that the trajectory of tropical cyclones can vary from one moment to another and although they now indicate the aforementioned, it is not ruled out that it varied to a greater or lesser extent.

It is likely that August will end with rainier conditions than normal in various regions of the country, with the threat of cyclones still presenting to the south or east of the Mexican territory.

Tropical strom Bonnie may form off the Yucatan Peninsula

VIDEOS: Networks report UFOs and lights from Yucatan to San Diego and from Colombia to Tijuana