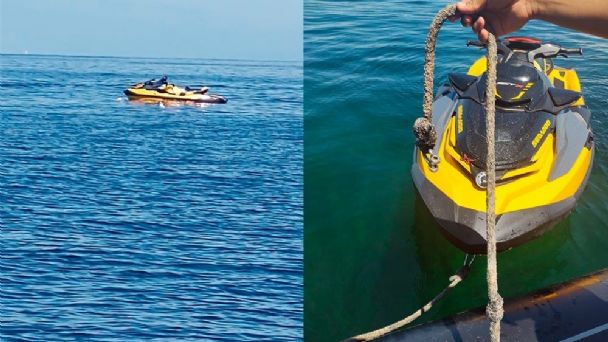 The jet ski was between Chicxulub and Telchac, so the Coastal Police reported it through social networks looking for its owner and it is speculated that it could be the man eaten by a shark

Elements of the Coastal Police belonging to the Ministry of Public Security found a jet ski adrift between the sea of ​​Chicxulub and Telchac.

While they made their rounds through the waters of Yucatán, the elements saw a yellow and black jet ski of the Sea-Doo brand with an approximate cost of $ 119,900 pesos.

Due to the place where the motorcycle was found, it is speculated that it could be the man who was eaten by sharks on Pérez Island.

A few hours ago, a large mobilization was reported by the IX naval zone based in Yucalpetén, due to the fact that a body in a state of decomposition of a bather was eaten by a white shark of more than one meter and a half in length.

Sharks devour the body off the Yucatan coast

They capture on video the moment when a body dismembered by sharks appears in the sea near the port of Progreso; they couldn’t rescue him.

A macabre discovery was made off the coast of Progreso when the floating body of a completely dismembered fisherman appeared; was eaten by sharks

The events occurred near Pérez Island, near the Alacranes reef 65 miles from the port of Progreso.

According to the first reports, approximately three days ago the man fell into the sea from a fishing boat, which is why it is presumed that he was a fisherman.

They find a body dismembered by sharks

The body of the man was found on Friday morning, floating in the sea, by visitors to the island, for which the 9th was notified. Yucalpetén Naval Base and the Secretary of Public Security ( SSP ).

In the afternoon, elements of the SSP went to the area where the body was found floating, which did not have the lower extremities and was in an advanced state of decomposition.

The SSP tried to rescue the man’s body, however, a shark that was near the area carried the remains to the bottom of the sea, a fact that was recorded on video.