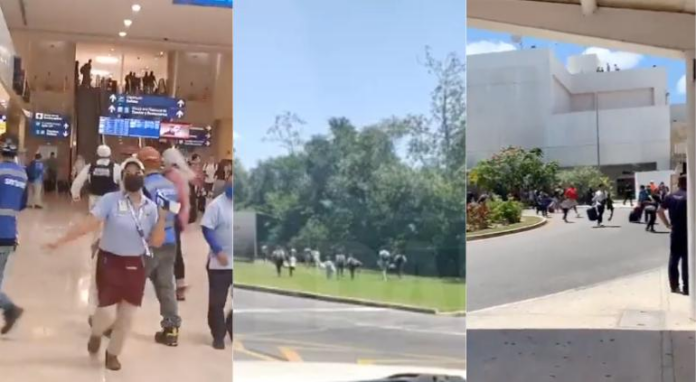 Passengers were left screaming and running for their lives after a suspected shooting at Cancun airport.

Gunfire was reported in terminal 3 of the Cancun International Airport, according to the C5, for which said authority decreed a Red Code.

Witnesses said people scrambled from the airport, and some were even trampled on as a desperate crowd attempted to flee.

One Twitter user said: “At the airport in Cancun waiting for a flight and just saw a herd of people running and screaming towards me. People ducking behind counters and chairs.

“People seem to think someone had a gun, but security can’t confirm. The terminal has at least partially been evacuated.

Other passengers took to social media to describe how people bolted for cover, leaving luggage and phones where they stood.

Twitter user @blainless said: “everybody’s reclaiming their phones now – lots of people (myself included) just went for cover without them.”

Passengers were seen running for their lives ( Image: CeciSolisQR/Twitter)

Another passenger said: “There was just a major shooting in the airport right behind where we were sitting. We all got trampled hitting the ground and crawling on the floor but we’re ok.”

The emergency number 911 of C5, received a call about detonations of a firearm in terminal 3 of the Cancun Airport, all the authorities in the place, at the moment no percussive cartridges or further indications confirming the fact are located, reported Lucio Hernández , Secretary of Public Security of Quintana Roo.