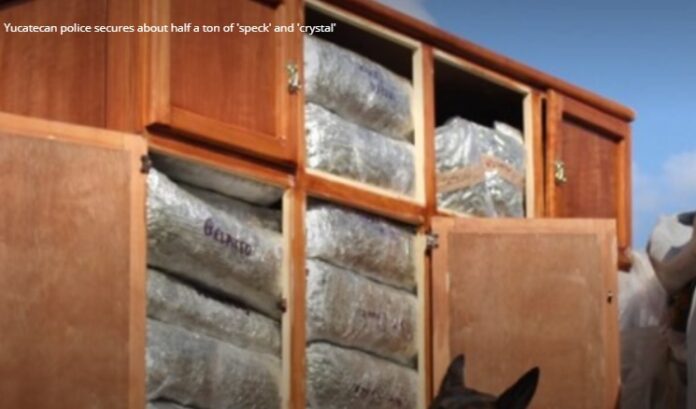 Mérida, Yucatán, February 20, 2021 (ACOM). – A shipment of approximately 450 kilograms of marijuana and 15 of methamphetamine (crystal), coming from the State of Mexico and destined for Quintana Roo, was secured by agents of the Yucatan Ministry of Public Security (SSP) at a checkpoint in the Campeche-Merida federal highway.

The drugs were hidden in two wooden wardrobes and in cardboard boxes transported in a redila truck with license plates from the State of Mexico. The smugglers were simulating a move.

However, with the support of a K-9 Officer, which did the marking of the truck, the state policemen carried out an exhaustive review and confirmed the contents of the furniture and boxes.

The agents of the Ministry of Public Security detained the driver JCRM and his companion DWP, both 38 years old, originally from Tabasco and Puebla, respectively, who, together with the vehicle and the drugs shipment, were placed at the disposal of the Attorney General’s Office. Republic (FGR).