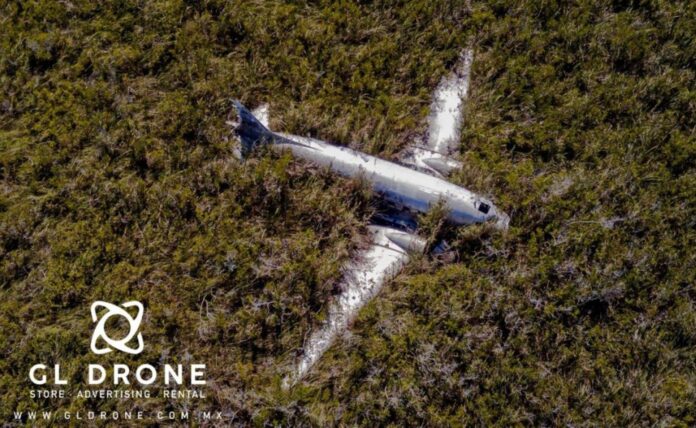 The mysterious aircraft has been abandoned for more than 30 years

MÉRIDA, Yucatan.- Since last January 2019, when the GL Drone company released the image of a lost plane in the Celestún biosphere reserve, about which there are several stories, numerous explorers have wanted to reach the site And this Saturday, May 22, the Ecoaventura Yucatán group intends to reach the place.

This group, made up of hikers and people who are dedicated to hunting, as well as sea and mountain tourist guides, announced on their social networks that this weekend they will try to reach the plane located 17.5 kilometers from the port of Celestún.

Experts point out that if you want to get there by land, the road is long and difficult to access, and if you go through mangroves, you have to use boats that will pass through narrow paths to reach the aircraft.

Experts point out that if you want to get there by land, the road is long and difficult to access.

The members of Ecoaventura have already tried three times to reach the plane but have not succeeded due to various problems.

“The expedition of the Ecoaventura Yucatán group to find the crashed plane in the jungle of the Celestún reserve is in its final phase. A group of experts from the Celestún community and explorers with skills in camping, hiking, athletics, among others, has already been formed. The plan has been made in such a way that situations are not left to chance, even respecting the natural environment of this site. Access is complicated and dangerous, but there is great motivation.

We managed to cross areas that seemed impossible and now we are going for the most exciting part of the journey. We hope to carry out this great adventure very soon ”, they indicated on their social networks.

History of the Celestún plane

The old Douglas DC-3 aircraft, with registration XB-PXO, fell in 1966 in the Petenes area of ​​Celestún, but it is pointed out that it was discovered until 1979 by elements of the then Attorney General’s Office (PGJ), when it was flying over surveillance in the area.

It is reported that the aircraft suffered serious damage to the front and both propeller engines, and no traces of the crew were found.

The versions of the inhabitants of the area remember that the mysterious plane fell loaded with drugs or contraband merchandise.

According to the people of GL Drone, the plane belonged to the well-known drug trafficker Pablo Escobar Gaviria for the transfer of drugs and other experts in aviation point out that it is the plane known as “El Venado” that several decades ago collapsed while moving Fayuca.

Move over Merida, Tampico takes the top spot as the safest city in Mexico