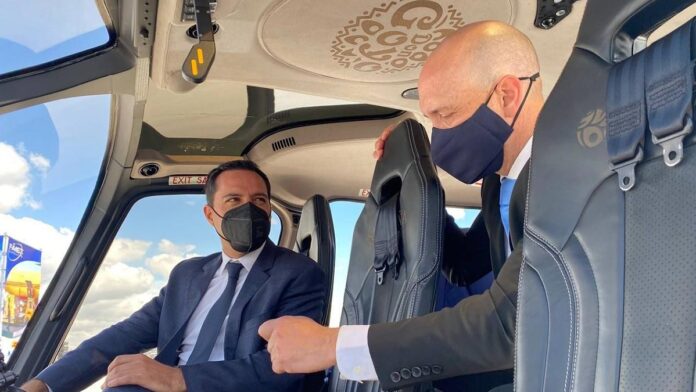 Mauricio Vila announces the opening of a helicopter school in Merida, which will become the first of its kind not only in Mexico but in Latin America.

The first helicopter pilot school in the southeast of the country of the Airbus company, a world leader in aeronautics, will be located at the Mérida International Airport and is expected to be ready to offer its first training and operation cycles in January 2022.

Yucatán, a benchmark in the space industry

With this work, Yucatán consolidates itself as a benchmark in the aerospace industry and in the training of professionals in this area not only in Mexico but throughout Latin America, announced Governor Mauricio Vila Dosal within the framework of the Mexico Aerospace Fair (Famex) 2021.

In the presence of the Head of the Airbus Helicopter Region, Alberto Robles, Vila Dosal signed, together with Ricardo Capilla, CEO of Airbus Helicopters and head of the international company in Mexico and Alfredo Velázquez Jiménez, director of the Escuela de Aviación México, an agreement to endorse the commitment, established in 2020, to open this helicopter school that will receive students not only from the state but from all over the country and Latin America, attending a maximum of 20 pilots in this first stage, so that soon the open call can be found on the school’s website.

Speaking a few words, Ricardo Capilla thanked Governor Vila Dosal for continuing to support the Airbus company and this project so that they can have the best conditions to come to Yucatán, “since I have coincided with him in various forums and events, in which It has shown all its interest in attracting this type of investment ”.

“After so many months of pandemic and crisis in this industry, Airbus reaffirms its commitment. We hope that the Heliescuela will take place at the Mérida Airport at the end of this year or the beginning of 2022 ”, highlighted the manager in the presence of the German ambassadors, Peter Tempel; from Spain, Juan López-Dóriga Pérez; and from France in Mexico, Jean-Pierre Asvazadourian.

Finally, Ricardo Capilla reiterated Airbus’s commitment to Yucatán, since, he affirmed, they share the same values ​​, and during the months that they have been working on this project, they have realized that the entity is the ideal place, not only because of its location but for its people are prepared.

Globally, Airbus is a leader in aeronautics, space and related services. In 2018, it had a workforce of around 134,000 employees and generated revenues of € 64 billion. The company offers the most complete range of passenger aircraft. It is also a European leader in the manufacture of refueling, combat, transport, and mission aircraft, and is also one of the world’s leading space companies. In helicopters, Airbus provides the world’s most efficient solutions for civil and military helicopters.

In Mexico, Airbus has a presence of almost 40 years, a workforce of 700 direct employees in its three divisions and generates more than 5,000 indirect jobs through its supply chain. The firm is a leader in the aerospace sector with a 60% market share in the commercial aviation industry. In addition, it has 22 military transport aircraft in service, a fleet of 150 helicopters and a communication network with Tetrapol technology that interconnects 32 regional networks and 200 municipalities.

The Mexico Aviation School (EAM) was founded in 1943 and is the main training for aviator pilots in Mexico, with 65 aircraft, 12 simulators, with a presence in Mexico City, Guadalajara, Cuernavaca, Acapulco, and Atizapán.

In his message, Vila Dosal stressed that Yucatán is in a frank economic recovery, leaving behind the impacts caused by the coronavirus pandemic and, as an example of this, cited that most of the jobs that were lost due to the health emergency.

Accompanied by the head of the Ministry of Economic Development and Labor (Sefoet), Ernesto Herrera Novelo, the Governor affirmed that to combat poverty it is necessary to create opportunities for people, and these are only created through employment, “we are aware that the Jobs are not generated by governments, but by private companies that they trust and that want legal certainty to be able to invest and that is what we have done in Yucatan, to give certainty and ease to companies that want to invest ”.

“We are very happy that Airbus is joining the companies that are deciding to invest in Yucatán, as Amazon, Tesla and many others did a few months ago that will be coming soon. We believe that it is the ideal place, due to the location, quality of life and the conditions that are occurring, to install this helieschool is the state of Yucatan ”.

The governor added that this is an important moment in Yucatán, since carrying a globally recognized brand, such as Airbus, is something that fills us with pride and that opens up many possibilities for our young people and for the entire southeast of the country.

“We are going to do everything on our part to make this investment fruitful for you entrepreneurs, because obviously what companies need is to have successful investments, but, of course, for us in the state it means more opportunities that are offered. through the generation of jobs and the investment that is needed for us to move forward ”.

In his turn, Alfredo Velázquez Jiménez, director of the Mexico Aviation School, highlighted the support that the governor and his work team have always given to this project, so the signing of this day confirms the intention to continue collaborating so that the helicopter school is completed in a timely manner.

In this context, the Governor held a meeting with the head of the Airbus Helicopter Region, Alberto Robles, with whom he analyzed the possibilities that this company can invest in Yucatán and presented the competitive opportunities that the state offers for the arrival of more capital. and the generation of a greater number of jobs.

As part of his work agenda, Vila Dosal also met with Daniel Parfait, CEO Safran México, a French high-tech multinational specialized in defense, aeronautical equipment and security, and with Olivier Piepsz, vice president for Latin America of the same company, to who raised them the strengths of Yucatan and the wide possibilities to carry out investments, as well as the highly trained human capital that is available.

The French company Safran is dedicated to the manufacture of jet engines for aircraft. It also manufactures landing gears, wiring systems, power transmissions, cabin interiors, and seats for commercial aircraft. The multinational firm has been present in Mexico for more than 20 years, mainly in the aeronautical market. With more than 5,400 employees distributed in seven production, maintenance, or engineering sites, Safran is the first employer in the aeronautical industry in Mexico.

Moments before, the Governor attended the opening ceremony of the Mexico Aerospace Fair (Famex 2021), led by President Andrés Manuel López Obrador at the Military Air Base Number 1 of Santa Lucía, where he spoke with the ambassadors of the United States, Ken Salazar and from France in Mexico, Jean-Pierre Asvazadourian, on the bilateral relationship between Yucatán and these nations. Then, Vila Dosal made a tour of the exhibition’s exhibitors’ pavilion.