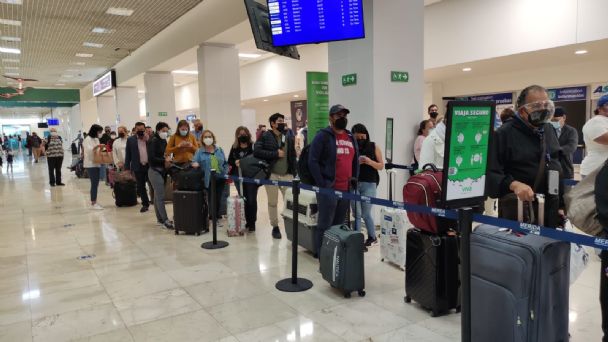 At least 4,500 passengers from 30 trips were affected, a situation that led them to make claims for the poor service provided by the airlines at the Mérida airport.

Hundreds of passengers were stranded yesterday at the “Manuel Cresencio Rejón” Mérida International Airport, due to delays and cancellations on Aeroméxico, VivaAerobus, and Volaris flights; A situation that after 2:00 p.m. generated a verbal confrontation between users and airline personnel, who without further explanation limited themselves to asking them to wait.

The atmosphere of aggression that was generated by the agglomeration of travelers, with suitcases in hand, had to be contained by the National Guard because the presence of the staff of the Consumer Attorney General’s Office (Profeco) was required.

Reports obtained by Por Esto! at the air terminal, they revealed that there were 30 flights (two canceled and 28 delayed) and more than 4 thousand passengers affected.

Although the fog that invaded the runways of the Mexico City Airport prevented the operation of the first two flights that depart from the runways of Mérida, the lateness of the three airlines has been detected since the weekend.

In the morning everything was calm in the air terminal of the Yucatecan capital. Passengers registered to be able to board the planes, mainly the morning ones, of Aeromexico flight 821 that had to leave at 06:00 hours, then they went to the waiting room confident that they would soon be traveling to the country’s capital; However, minutes later they learned that air navigation was interrupted by the fog, which was understood, but as the hours passed, the problem was taken into account.

Users not only complained about the lack of information to know about their departure if there was a rescheduling, but they also began to demand that they be provided with food or at least water.

The mood was heating up and forced the intervention of elements of the National Guard who had to contain the passengers who were at the VivaAerobus counters; where the screams were heard to demand that someone attend to their complaint about poor service.

The vociferous complaints were intertwined for minutes until the intervention of the authority, to call for order.

The VivaAerobus employees only mentioned that it was the weather conditions and therefore there was no responsibility of the company and it was enough to wait.

It was until 2:00 p.m. when, and due to the intervention of the Airport Administration, that the complaints were echoed and the complainants received a food voucher.

By then, the floor already served as a seat for dozens of them, while many others took up space in businesses that have seats.

Although some rejected the document they were given to supply them with a “lunch”, later a long line was made in which a hamburger and a soft drink were delivered.

The longest waited flight was 1100 of the royal airline, which should have arrived at 08:15 hours and was canceled. It was not until four hours later that some were able to leave for their destination.

The first flight that arrived in Mérida this Tuesday was Volaris 261, which landed shortly after 10:30 a.m., although it normally arrives shortly after 7:17 a.m. and returns to the country’s capital at 10:45 a.m..

From that moment on, the remaining flights began to flow, such as Aeroméxico’s 824. Regarding this, Ariel Irigoyen Sánchez, one of the passengers said that on Monday night the 7:00 p.m. flight was oversold, in which he intended to return to Mérida; So he had to spend the night in CDMX to return yesterday Tuesday and travel at 8:50 in the morning, but upon arrival, they informed him that he was delayed and took off shortly after 2:00 pm, to be able to step on Merida ground at 15:00: 30 hours. “It was a terrible experience,” he said.

Meanwhile, in Terminal 2 of the Benito Juárez Airport in Mexico City, passengers bound for Mérida on flights 826 and 828, could not leave at the scheduled time -before noon- so they were forced to wait longer. three hours to reach the Yucatecan capital.

Aeroméxico, responsible for these routes, like VivaAerobus, limited the information on the cause of the delay; that is becoming more and more frequent.

For passengers like Geovani Mezeta, his schedule changed from Monday, as he had to leave for Mérida on the Aeroméxico flight at 8:40 p.m., but he oversold and the company, although he paid for a hotel, food, and transportation; nothing could be done for the breach of its obligations caused by the interrupted service.

“It’s a total disorder,” said Rodolfo Flores, another passenger who left on the VivaAerobús flight to Mexico City at 3:00 p.m. The user called on the Federal Government to withdraw concessions from airlines that abuse customers such as VivaAerobús, which also charges its customers when they arrive late and even force them to buy another ticket, but when the company suffers delays, as these days, they do not want to compensate their clients, knowing that Profeco turns a blind eye and does not have a presence at the Mérida airport, but even so, he warned that he is going to sue the airline.