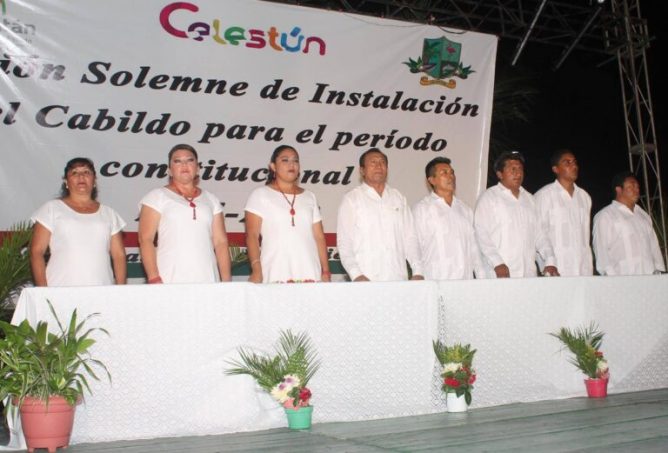 Celestun, Yucatán, (August 06, 2021).- Eleven people, including eight former councilors of the Celestún council of the 2015-2018 administration, and the former Mayor, Leonel Rosado Mena, were linked to criminal proceedings for their probable participation in acts that appear to be crimes of illicit use of attributions and faculties, embezzlement, organized crime, and the illegal sale of land that belongs to the municipality.

In a hearing held at the Oral Justice Center of Umán, the Control Judge of the fourth judicial district of the accusatory criminal system, Mariza Virgina Polanco Sabido, stated that the criminal process against those accused of these events will continue.

The representatives of the Prosecutor’s Office specialized in the combat of corruption stated that eight of the accused today, in their capacity as councilors of the Celestún council, in the period of the municipal public administration 2015-2018, between February 12 and August 30 of 2018, they illegally granted disposals of two city properties that until that moment, were the property of the municipality.

“Proceeding to sell them in favor of three other accused persons, partners of the purchasing company, all of whom are accused as direct material co-authors of the possible conduct of illicit use of attributions and powers and embezzlement, organized crime,” they quoted.

Through a council session dated June 18, 2018, the municipal body unanimously approved the alienation of said lands, even though 6 of the 9 minimum requirements for this purpose provided for in article 155 of the Municipal Government Law were not met.

It should be noted that in the case of the appraiser, also accused at the hearing, such conduct is attributed to him as a participant.

For her part, one of the ex-councilors who was not present at the hearing will be presented, with the help of the security forces if necessary, on August 23 of this year.

The Control Judge Polanco Sabido imposed the defendants with various measures to preventive detention: go to sign before the authority, seizure of assets, submission to the surveillance of the State Center for Supervision of Precautionary Measures and Conditional Suspension of the Process, prohibition of approaching witnesses, all these measures for the entire duration of the criminal process.

The judge granted the prosecutors six months to continue with the complementary investigation of the case.

Land Theft in Yucatan is a serious problem and all corruption will be investigated.