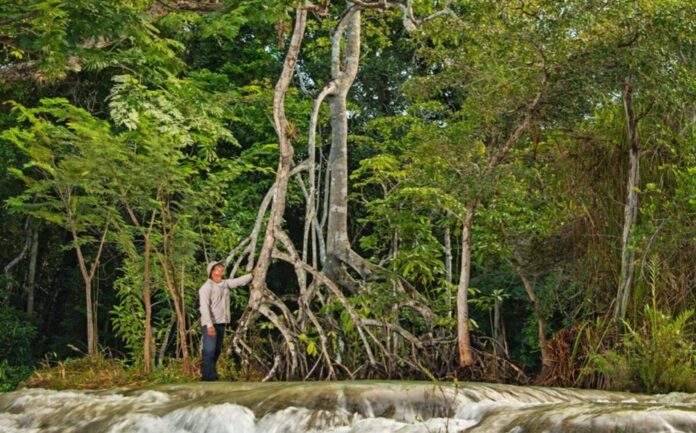 The study shows that the rare and unique mangrove ecosystem of the San Pedro River is a relic, that is, organisms that have survived from an earlier period, from a warmer past world.

An ancient mangrove ecosystem that was trapped in time more than 126 thousand years ago, was discovered deep in the heart of the Yucatan Peninsula, more than 200 kilometers from the nearest ocean, which is unusual because mangroves are located typically along the coasts; the finding reveals the impact of the sea level of the last interglacial period.

The results of the study led by researchers from the United States and Mexico, published on October 4, indicate that this “lost world” of lush red mangrove forest is located far from the coast along the banks of the San Pedro River. Mártir, which ranges from the tropical jungles of El Petén in Guatemala to the Balancán region in Tabasco, Mexico.

Through the analysis of genetic, geological and vegetation data with sea-level modeling, they determined that the mangroves reached their current location along the river, during the last interglacial period, about 125 thousand years ago, and have persisted there in isolation as the oceans receded over time, during the last ice age.

“The most surprising part of this study is that we were able to examine a mangrove ecosystem that has been trapped in time for more than 100,000 years,” said study co-author Octavio Aburto-Oropeza, a marine ecologist at the Scripps Institute of Oceanography at the United States. University of California at San Diego.

So the study provides a snapshot of the global environment during the last interglacial period when the Earth became very warm and the polar ice caps completely melted, making the global sea level much higher than it is today.

“There is certainly more to discover about how the many species in this ecosystem adapted through different environmental conditions in the last 100,000 years. Studying these past adaptations will be very important for us to better understand future conditions in a changing climate, “added Octavio Aburto.

Because the red mangrove (Rhizophora mangle) and other species present in this unique ecosystem only grow in salty or somewhat salty water, the binational team set out to discover how coastal mangroves settled inland in freshwater completely isolated from the ocean.

The study shows that the rare and unique mangrove ecosystem of the San Pedro River is a relic, that is, organisms that have survived from an earlier period, from a warmer past world when the relative sea level was six to nine meters higher. higher than today, high enough to flood the Tabasco lowlands of Mexico and reach what are now rainforests on the banks of the San Pedro River.

The fieldwork was directed by the ecologists of the Scripps Institute, Octavio Aburto, Paula Ezcurra, as well as by Exequiel Ezcurra from the University of California Riverside, Sula Vanderplank from Pronatura Noroeste, and by Carlos Manuel Burelo-Ramos from the Universidad Juárez Autónoma de Tabasco, Those who visited the site since 2016 collected rocks, sediments, and fossils for laboratory analysis, helping them identify evidence from the past that is consistent with a marine environment.

Researcher Carlos Burelo, a native of the region, drew the attention of the rest of the team to the existence of this relict ecosystem in 2016.

“I used to fish here and play with these mangroves as a kid, but we never knew exactly how they got there. That was the driving question that brought the team together,” he said.

The authors note that the region surrounding the study sites was systematically deforested in the 1970s by a wrong development plan; But the banks of the San Pedro River were saved because bulldozers couldn’t get there, so the area is still threatened by human activities, so the researchers highlighted the need to protect this biologically important area in the future.

Housing panorama of Mérida and Yucatán over 15,000 homes sold annually

Four arrested for murdering and butchering a watchman in Merida