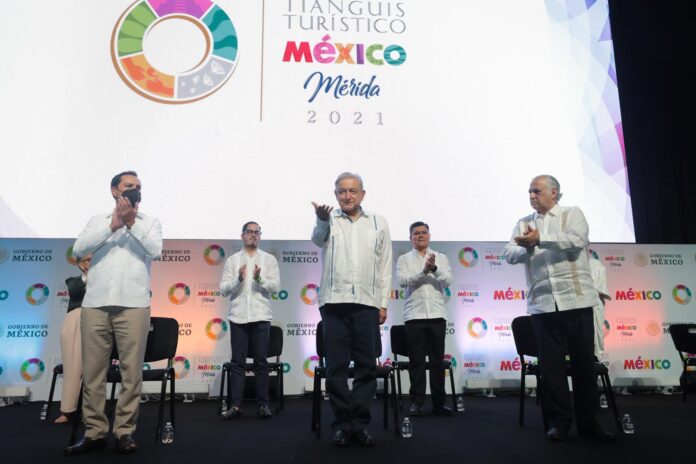 Tourism is essential; It is an economic activity with a social dimension because it generates jobs and wealth that is distributed, affirmed President Andrés Manuel López Obrador when inaugurating the Tianguis Turístico 2021 in Mérida, Yucatán.

The Chief Executive said that this event represents the beginning of a new stage in the sector after confinement by the COVID-19 pandemic.

“We have hopes that the tourist influx to Mexico will continue because we have a unique, extraordinary potential. Like Mexico, there are not two. (…) Everywhere there are natural beauties ”, he expressed.

He added that the southern and southeastern areas of the country have a great cultural wealth that will be enhanced with the Mayan Train, a strategic project of the Government of the fourth Transformation that will promote development in Chiapas, Tabasco, Campeche, Yucatán, and Quintana Roo.

The president recognized the effort of the scientific community to develop vaccines against COVID-19 in a short time, which helped control the epidemic and reactivate tourism and the economy.

“I hope that we will continue like this. We have a vaccination percentage in our country of around 85 percent, almost all with two doses, and today we announced that we are starting vaccination for adolescents between 15 and 18 years of age and we already have enough doses of the Pfizer vaccine, “he said. .

He highlighted the progress in the recovery of formal jobs; 20 million 850 thousand workers are currently registered with the Mexican Institute of Social Security.

“We have a great possibility of strengthening ourselves economically as a country going forward. We have several advantages and opportunities ”, he emphasized.

He stressed that in North America there is already a consensus on the need to strengthen the integration of the region with respect to the sovereignty of Mexico, Canada, and the United States, which will promote investment, the establishment of companies, and the generation of jobs.

In addition, the agricultural sector shows significant growth even in the context of the pandemic.

The Secretary of Tourism, Miguel Torruco Marqués, announced that in the last months of 2021 the arrival of 31 million international tourists is expected with a spill of 18 thousand 100 million dollars and an average annual occupancy of 46 percent.

“The Ministry of Tourism foresees that the tourism GDP, at the end of 2021, will register a participation of the order of 7.1 percent and at the end of 2022 this will be 8.3 percent of the national GDP, which implies the gradual process of the recovery of tourism activity national ”, he said.

He reported that, as of October, national investment remains at $ 9,108 million with 490 tourism projects that generate 156,600 direct and indirect jobs.

The president was accompanied by the governor of Yucatán, Mauricio Vila Dosal; the general director of the National Fund for the Promotion of Tourism, Rogelio Jiménez Pons Gómez and the secretaries of National Defense, Luis Cresencio Sandoval González and of the Navy, José Rafael Ojeda Durán.