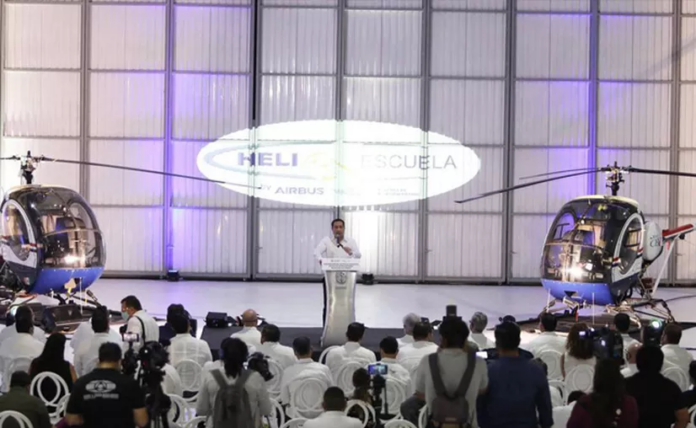 During the inauguration, Governor Mauricio Vila indicated that scholarships ranging from 10 to 100% will be offered

MÉRIDA, Yucatán.- The world’s leading aeronautical company Airbus arrived in Yucatán, when Governor Mauricio Vila Dosal inaugurated the first Helicopter Pilots Training and Training Center “Heliescuela” in the southeast of the country, as a result of the alliance between the entity and the French company, which consolidates the State as a benchmark in the aerospace industry and the professional quality training of pilots, not only in Mexico, but throughout Latin America and North America.

In this context, Ricardo Capilla, CEO of Airbus Helicopters in Mexico, highlighted the vision, resilience and dedication of the Governor in the search and management of this project, and thanked the ecosystem that it has generated, towards an economy of values ​​and business, so that this type of service is possible. “We are proud of this new chapter and we are sure that this alliance with Yucatán will be long-term,” he added.

There, too, Vila Dosal announced that his administration will offer scholarships of 10 to 100 percent to Yucatecans to study in this space, which is why he called on those who wish to be helicopter pilots, to come closer and enjoy this benefit, so that the economic is not a limitation for them.

From the Mérida International Airport, headquarters of said academy, the Governor led the cutting of the inaugural ribbon of the “Heliescuela”, which will begin to operate in January of next year, providing training to students, not only from the State, but from all the country, Latin America and North America, with the latest technological advances and the most demanding standards in security matters.

Also, in the presence of the head of the Ministry of Economic Development and Labor (Sefoet), Ernesto Herrera Novelo, and the director of the Mexico Aviation School, Alfredo Velázquez Maciel, the Governor affirmed that this is an achievement that is achieved after a very long term, but still very longed for, because the vision of his administration is to transform things into opportunities for the Yucatecans and the development of the State.

He also thanked Ricardo Capilla and Alfredo Velásquez Jiménez, president of the Board of Directors of the School of Aviation of Mexico, for being the main promoters of this coming and for the trust placed in the state. “For us, this is the first step in the long-term relationship we want to have with Airbus, one of the most important companies in the aerospace industry worldwide and, without a doubt, we believe that Yucatán has everything to be an important supplier. of the aerospace industry, “he said.