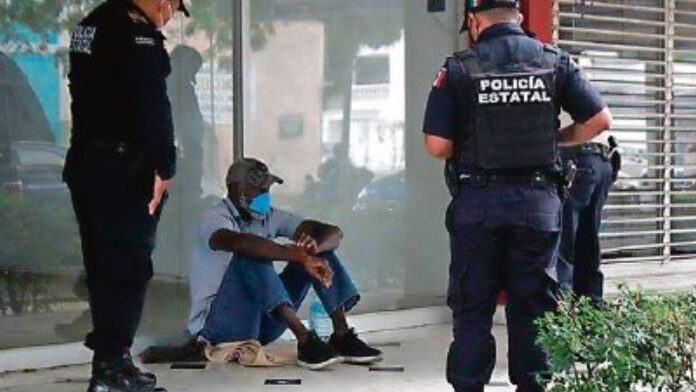 The subject detained in a Reforma building comes from Michigan and would be taken to Immigration for processing.

The “suspicious” man, hostile and uncommunicative, arrested in Mérida turned out to be a person from the United States who arrived in Mérida for unknown reasons.

He only provided officials from the Ministry of Public Security with a document proving that he is a US citizen, from Michigan, and his name is TLS, 61 years of age.

The subject was held yesterday, Saturday, shortly after noon at the request of a person from the Suites de Reforma building for his hostile attitude and because he occupied the corridor of the building as a bedroom since Friday the 21st.

El Diario published that he had the appearance of a Central American or Caribbean citizen and did not accept help from the police.

Migration would investigate the status of the “suspicious” subject

Given the hostility, he showed and the complaint of a user of the Reforma Avenue building, the SSP agents arrested him and transferred him to the corporation “with the established and permitted protocols.”

The foreigner did not commit any crime under common or federal jurisdiction, but the SSP would refer him this afternoon to the delegation of the National Migration Institute in Merida to investigate his legal or illegal stay in Mexican territory.

The citizen was strangely very reserved. He did not give the reason for his trip or how or why he arrived in Mérida.

He was wearing clean clothes, tennis shoes and a cap in good condition. A large suitcase that he had next to him, which was seized by state police, is her only belonging.

“Until noon he is in the building of the Secretariat of Public Security and today, Sunday afternoon, he will be transferred to the National Migration Institute,” reported the SSP Communications office.

“The foreigner, from Michigan, was seized yesterday by elements of the SSP in response to the complaint of a woman who, according to what she said, the man confronted her when she asked him to leave a corridor of the building where she works.”

The SSP reported that the woman reported to 911 that the individual had been in a corridor of the suite building on Reforma Avenue since Friday.

He added that he reacted angrily when asked to leave, so she requested police support through 911.

When the agents arrived, the man maintained a hostile attitude, even when they asked him the reason for his stay and how they could help him.

Since there was no response from abroad or a request for help, but there was a complaint, they transferred him to the SSP building.

The corporation stressed that the police action protocols were followed to allow the procedure to be carried out safely, both for the complainant and for the detainee.

They transferred him to the corporation building and placed security devices (handcuffs) on him in accordance with the provisions of the National Law on the Use of Force.

Information on the case was requested from the representative of the Federal Government in Yucatan, but the foreign citizen was not yet aware of nor had he received it.