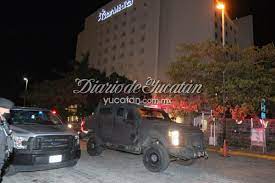 Versions that the patient is the leader of the “Los Pelones” cartel in Quintana Roo.

Federal authorities carry out a strong operation in a private hospital in the north of Mérida where Johnny Israel Nájera Flores “El Johnny “, leader of the “Los Pelones” cartel, would be hospitalized, in Quintana Roo.

According to information from the authorities, the survivor was identified as Jhony Israel Najera Flores “El Jhony”, who was recently released from prison and was the leader of “Los Pelones” and the criminal cell “La Berredora” that they commanded from prison.

The couple was deprived of their liberty minutes before dawn in Bacalar, they were transferred to the aforementioned community and there they executed the woman with bullets while the subject was only injured with a knife, although the target was him.

The injured man was taken to the hospital in Chetumal to be treated as he had several injuries.

In 2013 “El Jhony” Los Pelones was arrested along with three more hitmen under his orders. The four were linked to at least four executions and were captured with weapons and drugs.

The most serious thing is that both “Johnny” and another of the assassins were arrested several times in possession of firearms and drugs; being released shortly after.

From the Cancun prison “El Jhony” the gang “La Barredora” operated under the protection of the prison authorities whom it had bought, coming to commit a series of executions, extortion, and kidnappings to try to have control of the square generating the increase in violence in the tourist destination.

It was learned that “Johnny” was seriously injured, so he was taken to a hospital; however, hours later he was transferred to Mérida by land under a strong operation by the National Guard.

The private hospital, located in Altabrisa, is heavily guarded by the National Guard and agents of the Attorney General ‘s Office, who would be waiting for an arrest warrant against the dangerous subject for the crimes of homicide and drug trafficking.

The injured man arrived in Mérida shortly after 7 p.m. in an ambulance that was guarded by at least five National Guard trucks.

The northern Merida area is practically under surveillance by federal authorities since some attack directed at the dangerous subject is feared.