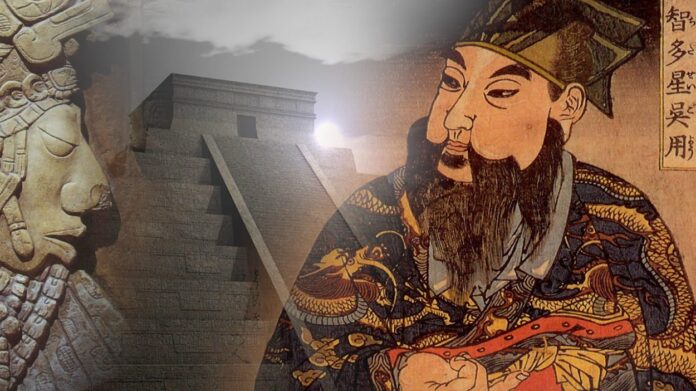 Some theories suggest that the Chinese were able to set foot on American territory before the Spanish. We tell you about them.

Currently, there are several theories that question whether Europeans were the first civilization to encounter the peoples of America. One of them is the one that suggests a probable encounter between Chinese and Mayans. According to Hu Chundong, a professor at Peking University, there are some similarities between the Chinese and Mayan languages. Based on his comparison of the two languages, at least 22 words bear a resemblance, especially if the analysis focuses on the South Asian country’s dialect.

Fusang: the meeting between Mayans and Chinese?

Another of the tests proposed by Chundong is the resemblance of the Mayan art found in Campeche, Mexico, and the crafts of the Tang Dynasty. This same theory holds that a group of scholars in the Tang Dynasty wrote about a group of sailors who traveled to a distant country called Fusang. It was the Buddhist monk Hui Shen who first described Fusang in the year 499. According to his description, the place was 20,000 li from China, which is currently 8,316 kilometers.

According to the orientalist Joseph de Guignes, the place corresponds to the American coast and not to Japan or Afghanistan as others maintain. Hui Shen held that Fusang was a place with many edible, oval, red, pear-like fruits. He had wealth of gold and silver. Their society was organized and they wrote on paper made from vegetable bark. They wore loincloths and hunted deer.

Some speculate that this place could be between Mexico and Guatemala. As for the materials to make handicrafts, both civilizations favored the use of jade, to which they attributed healing powers and implemented its use in funeral rites.

Regarding religious thought, both cultures deified feathered serpents such as Kukulkan or the Chinese dragon Loong. In addition to considering the world in divine dualities.

However, there is a discrepancy in the theory of Joseph de Guignes, since Fusang would have converted to Buddhism according to Hui Shen, in addition to practicing cremation and owning animals such as horses, which did not arrive in America until after the conquest. The latter reinforces the idea that Fusang was in Afghanistan.

The Asians arrived before the Spanish

On the other hand, in 2002 the retired agent Gavin Menzies wrote the best seller 1421, the year in which China discovered the world, where he maintains that the Chinese admiral Zheng He arrived in America in 1421, that is, 71 years before the Spanish Christopher Columbus. If this thesis is true, the Chinese would have arrived in America earlier, but they would not have had the ability to inherit any relevant influence.

Finally, the most well-founded hypothesis is the one that refers to DNA studies, which concludes that during the ice age, different migratory currents from Asia settled in America, founding the original peoples, including the Mayans.

For The Latest Mexico News About Living, Working, Investing, or Retiring in Mexico Please Join and Share our Page Click Here