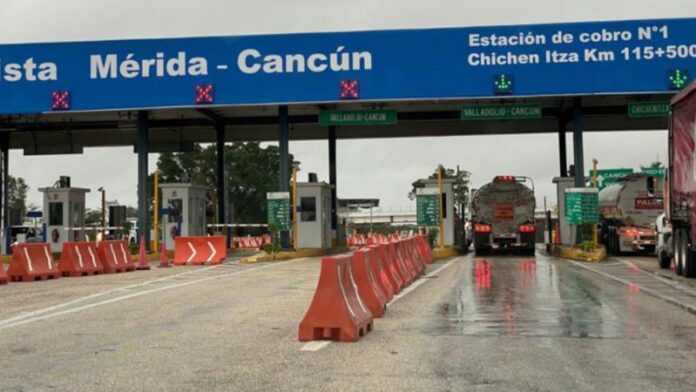 Although Federal Roads and Bridges (Cafupe), dependent on the Ministry of Communications and Transportation (SCT), determined to postpone the authorization in the increase in the payment of tolls on the country’s toll roads, in the case of the Mérida-Cancún, prices increased a little over a week ago, according to some drivers who have passed through it in recent days.

Alfonso Rivero Flores, president of the Association of Service Providers, in the Historic Center of the city, considered the increase in vehicle toll prices to be unjustified, including the Mérida-Cancún toll road, which is the most expensive in the entire country. , in spite of the dangers that it turns out to transit it, due to the works that are carried out of the project of the Mayan train.

How much is the toll on the Mérida-Cancún?

Regarding the prices, according to the data that was obtained, from Mérida to Cancún it had a cost of $553, now they add up to $610, in such a way that taking this intermediate city as a reference, from Valladolid to Mérida the cost was $195, now already was increased to $210.

In the case of Valladolid to Cancun, the price was $358, now it has reached $400, while the one that leads to Playa del Carmen, from this city, the cost was $238, now it has increased to $302, according to reports. to meet some drivers.

It must be remembered that the Mérida-Cancún toll road is concessioned to the company “Ingenieros Civiles y Asociados” (ICA), the same company that is in charge of the project for the fourth section of the Mayan Train, which starts from Izamal and concludes in Cancun.

This situation indicates that despite Cafupe backing down on the authorization of the 7% increases in toll roads until further notice, at least in the Mérida-Cancún it is not being respected, despite numerous complaints from drivers. who transit it and who are at risk of suffering accidents on that road.

On the matter, Alfonso Rivero Flores, commented that the increase in prices on the toll road is not justifiable, since due to the works that are being carried out, the risk of suffering an accident is high and constant.

He explained that when traveling along that road, some dump trucks suddenly come out of gaps without the slightest precaution and cause accidents, as has happened since the work began.

He said that the state and federal governments must intervene so that not only the increase is allowed, but that they do not actually collect the toll fees, because in his opinion no payment is justified.— Juan Antonio Osorio