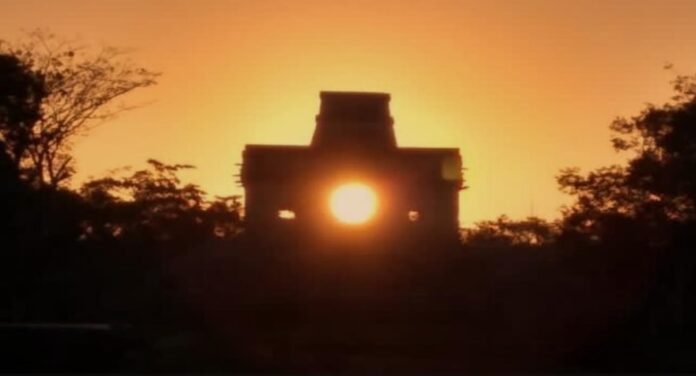 For the second consecutive year, there were no witnesses when Kin, the Mayan god of the Sun, appeared in the Temple of the Seven Dolls, in the archaeological zone of Dzibilchaltún.

The Sun went through the main window of the pre-Hispanic building at 6:10 in the morning, punctually fulfilling his appointment at dawn as every year.

To avoid contagion of Covid-19, the National Institute of Anthropology and History (INAH) did not allow the entry of tourists to observe this phenomenon of the equinox that heralds the arrival of spring.

The doors of Chichén Itzá will also remain closed during these days, so the god Kukulcán will descend the steps of the Pyramid of El Castillo without the presence of the public.

The Temple of the Seven Dolls is an area where tourists gather annually to witness the dawn and the arrival of spring; According to some traditions, it is the ideal date to recharge and start a new annual cycle of seasons.

This temple is the most important construction in the Dzibilchaltún area and it gets its name from the seven raw clay dolls placed under the temple floor.

The shape and orientation with which it was built allows that on both the spring and autumn equinox, the sun king is visible through the upper window of the building.

One of the reasons why this construction is so amazing is because it shows the wide and deep knowledge that the Mayans had of astronomy and also of mathematics; It is not sterile to mention that they are one of the few cultures of the time, around the world, that developed the abstract concept of mathematical zero.

The archaeological zone also has a cenote that is directly connected to the Caribbean Sea through underground tunnels, however it is possible to immerse yourself in its cool waters.