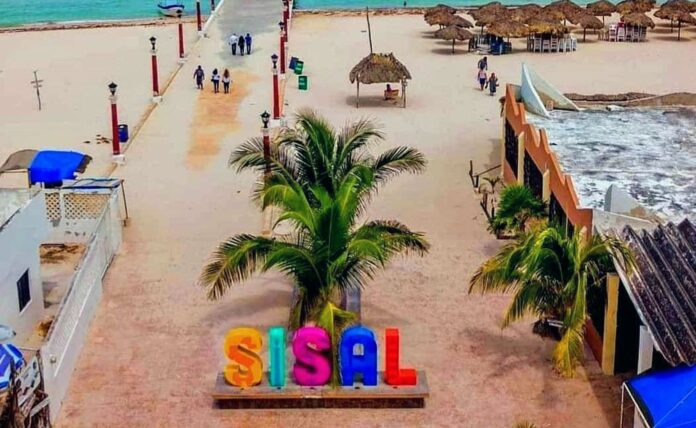 The arrival of visitors doubled, so several service providers began a training process to improve care

Sisal Yucatán.- With a population of close to two thousand inhabitants, Sisal was called Pueblo Mágico in December 2020 but local service providers have had to face serious problems in providing visitors with basic services, since a few weeks ago about 12 thousand visitors arrived at this port.

According to the residents, since this Hunucmá police station is considered a Magic Town, the arrival of visitors doubled, so several service providers began a training process to improve service due to a large number of tourists.

Several businesses in this port are carrying out adjustments and improvements to their premises, but even with this situation, they state that there is a lack of infrastructure, trained personnel who can offer travelers the services they require.

These merchants ask visitors who arrive at these recently declared “Platinum” beaches, understanding why this destination cannot offer them luxuries like in other ports in Yucatan or in other states.

Visitors commented that the prices of the food in this place are accessible, coming to eat with the family is not expensive, and the road has recently been repaved, which invites travelers to take this route to reach this destination.

“An order of fried fish accompanied by salad, side dishes and tortillas costs 100 pesos, an order of shrimp or a cocktail of this crustacean is 150 pesos, a dogfish in 80 pesos, soft drinks in 25 pesos, beer in 35 pesos, so it turns out to arrive at this destination with the family, ”said Jesús Manrique.

In this port there are no clubs, or squares, or large restaurants or hotels, it does not have an important infrastructure to receive a large number of visitors who, before the closure of Progreso port in these Easter holidays, came to know this tourist destination; Sisal is a place to rest, camp, observe birds and other species of the region, ride a bike, swim in springs, eat delicious food, fish.

It should be noted that at the beginning of the 19th century the port of Sisal, originally called Santa María del Sisal, was opened, where the first exports from Yucatan to Havana were made, this is how Sisal gradually became a small fishing town, which nowadays it offers its visitors ecotourism and relaxation offered.

It was historically the main port of Yucatan from the 16th century until the beginning of the 20th century when it was replaced by the port of Progreso, founded to absorb the management of the then main industry of the state, which was the henequen industry.