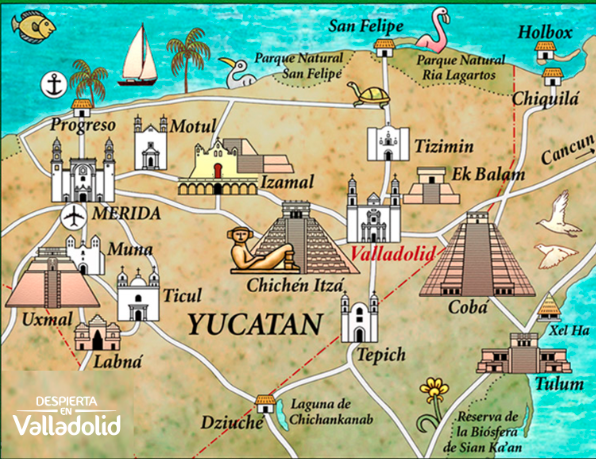 Xcaret has already made its way to Yucatán. The group first invested in the Mucuyché farm, located south of the state capital where it also offers cenote tours.

Until recently, the story of the rebirth of that small city was told by people like the hairdresser at the Valladolid Barbershop, also called Coqui Coqui.

He tells of the generosity of his boss, an Argentine model popular in Yucatán for buying old houses almost in ruins, which he converts into spaces that bear the same brand and whose architecture many want to register on his Instagram profile.

Valladolid was until last year a kind of ’boutique’ town with a Calzada de los Frailes that alludes to the pleasure of walking in a true colonial street, as in San Miguel de Allende. Then Miguel Quintana Pali arrived …

The creator of Xcaret in Quintana Roo announced that he will found Xibalbá in this town located between Mérida and Cancun. To begin with, he opened the checkbook to inject 2.8 billion pesos into the project that aims to take people to the Mayan underworld.

The local indigenous culture assumes that cenotes represent the third element of the cosmos, after heaven and earth. In Xibalbá lived and reigned the ‘stark’ Kisin, the ‘lord of death, and on that theme, Quintana will base a tour of eight closed and open cenotes, caves, crystalline water, and passageways full of stalactites where some can stay in 90 rooms spread over three boutique hotels.

Xcaret has already made its way to Yucatán. The group first invested in the Mucuyché farm, located south of the state capital where it also offers cenote tours, although in a smaller infrastructure compared to what is coming in Valladolid.

Quintana’s promise is to generate the least possible impact on the environment, so that in the Xibalbá project, of 350 hectares, only 10 of these will intervene with the construction of buildings where it intends to offer 800 direct jobs to serve about 2 daily 1,500 visitors.

The state of Yucatán, the founder of Xcaret said on Wednesday, has great tourist potential with colonial cities, towns, henequen haciendas, churches, cathedrals, monasteries, giant cenotes, which it would be useful to have in Quintana Roo.

17 companies were added to Quintana’s call, including Erick Álvarez, from Grupo Alves, a company initially dedicated to the development of sustainable farms and real estate, which added small shopping centers and hotels to its activity. Alves committed this week an investment of 653 million pesos that will complete a total of at least 4,240 million, applied from now until 2023 in high-end housing and tourism projects in Valladolid.

Until now, most of the visitors who spend the night in the 1,100 rooms of this location come from France and Spain, interested in knowing the center of the Mayan culture and its jungles. About 30 percent come from the United States and a small minority from domestic tourism, which is prevalent only on single-day visits.

Valladolid is the third most populated municipality in the state of Yucatán, after Mérida and Kanasín.

Grupo Alves builds a Hotel Gran Encomendero there; the Plaza Santo Secreto, with commercial premises and 10 restaurants, where it will apply 120 million pesos; Fincas Los Álamos, of 270 million; Álamos Concept Towers, a complex of 111 apartments where it will invest 189 million pesos and La Casa del Encomendero, a unique suite concept where it will bet 4 million more.

The company Cenote Mukul joined the crusade, which will invest 500 million pesos in a project consisting of wellness camping destination villas.

This infrastructure is recovering from the pandemic and receives about 400 monthly passengers from Ecuador, in addition to private flights that strengthen the specialization in tourism with high purchasing power.

In that ancient city the rumor of the announcement of a strong investment of a high-end project to stay within the Mayan civilization sounds, which could increase the competitiveness of Chichén.

The author is the general director of Special Projects and Regional Editions of El Financiero.