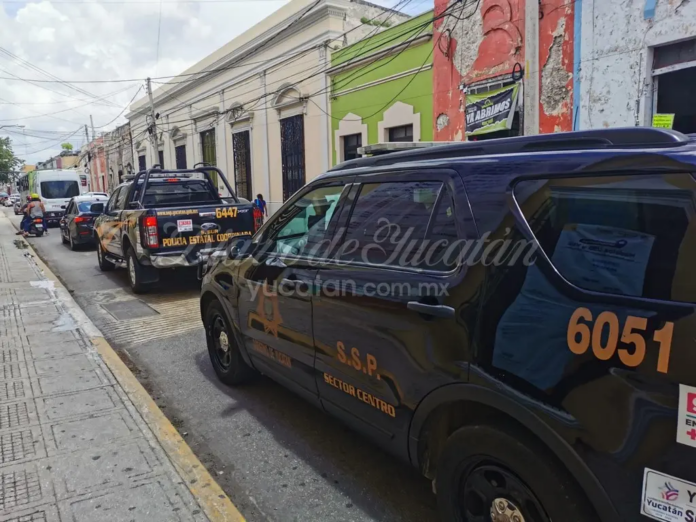 MÉRIDA.- SSP agents arrested three people related to the murder of an SSP policeman in Mérida-Motul. In addition, parallel to this, the body of a woman allegedly murdered on the way to Gran San Pedro Cholul was found, a fact with which those captured would also be linked.

According to preliminary information, the suspects were located at the Posada Espinosa hotel, located on the way to Mejorada. They were detained in the vicinity of the bus station, on Calle 65 and 68.

This implied that a large police deployment took place in the center of the city that involved municipal and state police and elements of the National Guard, who were in charge of conducting inspections in various places of accommodation and transport terminals. Caravans of police vehicles were seen in different parts of the city center.

They find the corpse of a woman

In addition, around 1 in the afternoon the body of a woman, identified as Teresa Aurora VC, was found in a property located on Calle 39 between 16 and 18 of Gran San Pedro Cholul, in the area where the death of the police officer occurred.

The investigating agents found this address since the vehicle in which the criminals fled was registered in the name of a person who lived at that address. According to the neighbors, there lives a family with children, which is why it is believed that those now detained would have committed an assault on the property and stole the vehicle.

Subsequently, the attack on the SSP agent would have occurred. Currently, the authorities of the Prosecutor’s Office are waiting for a search warrant to enter the property and carry out the removal of the body.

They shot the policeman and fled in the allegedly stolen car

As we reported in a separate note, around 8 am an SSP agent was attacked by two men and a woman, on the way to Gran San Pedro Cholul. They would have disarmed him and shot him with their own weapon.

The people fled in a red Toyota Yaris vehicle that was located hours later. At 11:28 in the morning, the police spread the faces of the three suspects on social networks: two men and a woman. One of them is bald, middle-aged, the other looks in the picture with a mustache and the woman with long hair. The warning notes that clothing may vary.

In addition, a video was disseminated on social networks that would have been recorded by people who passed through the place at the time of the attack. The two men can be seen beating the agent, while the woman picks up some clothes. Whoever recorded shouts with the intention of attracting the attention of the attackers, while another voice is also heard saying: “Oh, they are going to shoot him.”

On the other hand, a recording of the alleged murderers also circulated when they arrived at a Mérida gas station aboard a public transport van on the Baca-Mérida route, after allegedly committing both crimes.

The SSP mourned the death on social networks.

The three people who were arrested by the authorities for the murder of a young policeman on the Mérida-Motul highway are also the ones who, minutes before, allegedly killed a woman in a home on 39th Street of the Gran San Pedro Cholul subdivision. The alleged murderers.

This was announced by the Secretary of Public Security, Luis Felipe Saidén Ojeda, who at a press conference added that both the SSP and the State Government will provide all their support to the family of the officer fallen in the line of duty, who was 23 years, four of them at the service of this agency.

He took the opportunity to mention the importance of updating the vehicle registry, because thanks to the updated Yaris license plates that the criminals used to escape, it was learned that it belonged to a woman living in Gran San Pedro Cholul, where a police convoy went and so it was. possible to discover the other crime, perpetrated by the same people.Rescue of the girl.

The alleged murderers are originally from the State of Mexico, and the motive behind the murder of the woman was not reported, which later led to the crime of the police officer.

It should be noted that when the agents went to the property where they executed the woman, they rescued their daughter, a child under 3 years of age who was in her crib.

It was reported in various media that the woman was called TAVC, aged 35 or 38, and that she was a bank employee, but these latest data on the identity of the woman have not been confirmed by the authorities.