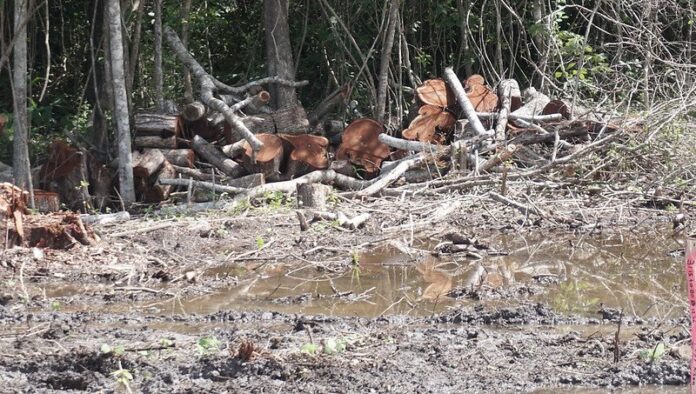 Every year, on average, more than 22,000 hectares of forest are deforested in Yucatán, reported José Eduardo Bestard Barrera, head of the Department of Restoration and Protection of the Forest Development Promotion Office of the National Forestry Commission (Conafor).

The official explained that agriculture, livestock and the expansion of the real estate industry are the activities that most predate the state’s jungle.

Over 100 years, according to estimates by Pronatura Peninsula de Yucatán AC (PPY), the state has lost between 60 and 70 percent of the original vegetation that the region had.

According to the biologist, Conafor collaborates with the recovery of forest vegetation through various programs and subsidies that it allocates to civil groups, projects of research institutions, and communities to undertake ecological restoration actions.

The map shows in red those places that have been deforested in the period 2001-2016.

In 100 years there will be nothing left

He recently began the restoration of mangroves on the north coast of Yucatan, Dzilam de Bravo region, promoted by PPY, the Center for Research and Advanced Studies (Cinvestav) and the group of neighbors known as Los Restauradores de Dzilam de Bravo, where Conafor contributed 2 million pesos.

Bestard Barrera indicated that the agency has a goal of recovering 2,500 hectares of forest per year, through each of the programs it provides.

Permits to build new subdivisions, changes in land use, are granted by the state and the municipality, through a committee dedicated to this issue, where Conafor also participates. Therefore, they have emphasized the need to migrate to improve agricultural and livestock practices, sustainable, agroecological systems; for example a sustainable milpa, planting species within the pastures instead of just deforesting.

For Efraín Acosta Lugo, Pronatura’s technical coordinator, it is clear that the loss of the forest is due to the significant growth that has occurred in the surroundings of Mérida, above all, and this can cause severe problems in the future, he stressed.

The researcher indicated that municipal regulations allow this, that is, that companies comply with regulations and authorizations, but it is necessary to review and work together with the authorities so that these construction regulations allow vegetation to be conserved, he said.

Ways must be found, he said, that are economically viable and environmentally sustainable. “Some subdivisions, while increasing the availability of houses and real estate, we are also losing vegetated areas,” he stressed.

On the other hand, he explained that in the state, over 100 years, the livestock production of the east and the henequen of the center are those that have changed the vegetation the most, they are the most deteriorated areas, but that have the possibility of being restored.

Between 60 and 70 percent of the original vegetation has been degraded, it does not mean that it has been completely lost, he clarified, this has been due to “patches”, fragmentation of forests, and not so much due to complete loss of coverage.

The expert indicated that producers, ranchers and the general public should focus on changing their practices; more can be created, sustainably and by recovering vegetation. “We need to find ways in which producers can continue to produce, with greater value, on a smaller surface, in a more sustainable way, which allows the regeneration of forests,” he said.