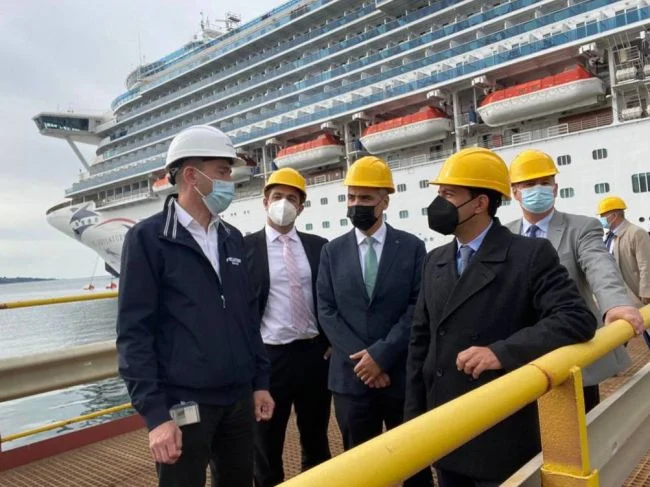 Following the commercial mission of Governor Mauricio Vila Dosal, who is headed by Italy in order to promote the reactivation of investments and projects for Yucatán, the naval giant Fincantieri announced that it will increase its multi-million dollar investment for the construction of a shipyard, the largest in America, in the port of Progreso, which would trigger a great generation of jobs and the arrival of more companies related to the shipping industry to invest in the state.

The Italian company not only confirmed that in the first stage it will invest 150 million dollars, for which a letter of intent had already been signed months ago, but that said investment increases to 220 million dollars, which means a milestone in the development economics of the port and of all Yucatan.

As reported, Vila Dosal had an intense day of work yesterday that took him on his first day to two Italian cities, Monfalcone and Pordenone, where he toured three companies related to the shipping industry and the construction and equipment of ships, yachts, and cruise ships, in order to know the needs of these companies and show the characteristics and benefits that the port of Progreso has for them to develop there.

Now, the governor visited the port of Trieste, where he met and toured the great Fincantieri shipyard, “Arsenale San Marco”, the largest shipbuilder in Europe, and from where giants of the seas such as the “Crown Princess” have come out. Carnival Cruise Line company.

During his stay, Vila Dosal held work meetings at Ficantieri’s main offices in Trieste, with him with the administrative director Fabio Gallia and with the director of service divisions, Giorgio Rizzo; as well as Daniele Fanara and Lawrence Zammit, vice presidents of marketing, strategy and sales.

Subsequently, the governor made a tour of the “Arsenale San Marco” shipyard in Trieste, which is dedicated to the maintenance, repair, reconstruction, and transformation of cruise ships and other vessels, whether in dry docks or floating docks. It was possible to observe its operation and thus appreciate an infrastructure that would be very similar to the Progreso port project. On this tour, he was accompanied by Lawrence Zammit and Andrew Toso, vice president of the division of boat conversions, repairs, and services.

At these meetings, Vila Dosal greeted and spoke with Professor Alberto Marino, from the Department of Engineering and Architecture of the Naval Engineering Section of the University of Trieste, about the training of personnel, the training processes, and how dry docks are planned to be carried out in Progreso, and due to its much larger size than that seen in Trieste, it will allow all the aforementioned works to be carried out on the latest generation boats.

In his meeting with the governor, the professor learned about the capacities of the Universities dependent on the state government, such as the Polytechnic University of Yucatán, the UTM, and the Progreso Superior Technological Institute; being pleasantly surprised and pointing out that he is sure that with the university superior technicians and the engineers who are graduating, the adaptation to work in the future Progreso shipyard will be much faster.

As previously announced, Fincantieri plans to design and build a new ship repair, conversion, and maintenance yard, which will include the fabrication of two masonry piers, the largest in the Americas.

With the visit of Governor Vila Dosal to that company, it was confirmed that these Yucatan shipyards will have a dry port of up to 400 meters long, where large ships will be received, in particular cruise ships, as well as large container ships and tankers that require complex operations. .

In addition, the project includes a lifting platform for units up to 150 meters in length, approximately 1,000 meters of docks, cranes, workshops, special equipment, offices, and warehouses.

This project would place Yucatan in the sights of the large shipping companies that will require its services and will also be a source of a large number of jobs, not only in its construction but in its subsequent start-up, especially engineering specialists. construction, naval engineering, design and equipment, among many other related businesses that can be attracted.

The Fincantieri company, after the acquisition of the Norwegian group Vard in 2013, and 50 percent of the French shipyard STX France in 2018, multiplied its size becoming the fourth shipbuilder in the world, which designs and builds merchant ships, cruise ships, and warships, also actively collaborates in their repair.

This gigantic company is listed on the Milan Stock Exchange and the NASDAQ in the United States and currently has more than 20 thousand employees on four continents spread over 18 shipyards in Italy, Norway, Romania, Vietnam, the United States, Brazil, and Australia.

For Fincatieri the great moment of expansion occurred at the beginning of the 1990s, managing to build its first passenger ship, the “Crown Princess” of the Carnival Cruise Line company. For the period 1993-2001, Fincantieri grew exponentially, building at that time 20 passenger ships, 16 ferries, and 18 military ships, of which 13 were for the Italian Navy, owning, in 1998, eight shipyards.

In 2005, Fincantieri decided to expand, entering fully into the manufacture of yachts, ship repair and design of systems and components. By the end of 2008, it entered the North American defense market by acquiring Manitowoc Marine Group, renaming the brand Fincantieri Marine Group. Two years later, it expands its presence to the Middle East, creating Etihad Ship Building LLC, with the aim of building and repairing warships for the countries of the Middle East.

With the multi-million dollar investment to be made in the port of Progreso, Fincantieri will have the largest shipyard in America and will generate a substantial change in the economy and quality of life for Yucatecan families.

It is worth mentioning that, with this trade mission, it is not only seeking to return to the projects that were had in Yucatan before the pandemic, but to go further and explore new forms of investment in accordance with the new post-pandemic times in order to look towards the future. future and keep up with and even one step ahead with the advancements of science and technology along with the needs that arose.

It must be remembered that, from the beginning of his administration, Governor Vila Dosal made one of his goals to position Yucatán as an attractive pole of large investments and companies that generate better-paid jobs and opportunities for social development.