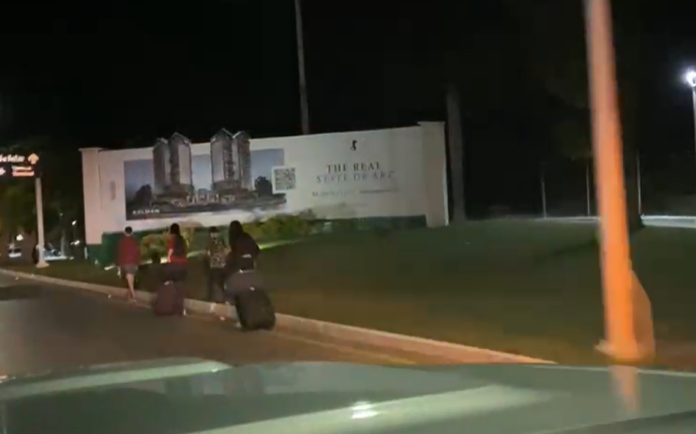 Every night the many travelers who arrive at the Mérida airport on the last flights experience ground transportation problems, they risk their safety and belongings because they walk a long distance under a dim light, the shade of the trees and on the side of the road to board. one of the radiotaximeters waiting for passage on International Avenue.

For several months this lack of concessioned taxi service at the Mérida airport has affected travelers, but today the problem is more visible due to the number of users who arrive on the last flights.

No taxi service, no other options

Many travelers do not have a private vehicle to wait for them in the parking lot or family members to pick it up. The problem becomes greater because it is not possible to request a private platform taxi either because these vehicles cannot enter federal facilities, this is due to the fact that the taxi service has been concessioned by Grupo Asur to the unions Frente Único de Trabajadores del Volante (FUTV), Grupo ADO and Flex Shuttle, a company that is headquartered at the Cancun airport.

The newspaper obtained several videos of this problem of lack of ground transportation service at night at the airport, showed it to the president of the Yucatan Tourism Business Council, Jorge Carrillo Sáenz, and asked for his opinion.

“We had this problem with the restrictions on night vehicle mobility during the crisis of the covid pandemic, but that measure has already been lifted, this situation should no longer occur that tourists and passengers who arrive on the last flights have to walk to midnight, ” said Carrillo Sáenz.

“Something is happening with this taxi service because there are three concession companies. It is not possible that they only work during the day when the greatest number of flights arrive and neglect night flights. That they agree between the three and provide the service from the start of the flights until they end ”, continues Carrillo Sáez.

The tourist is looking to have a good first impression

The president of Cetur stressed that the first impression that the tourist receives is his arrival at the airport and he must always have the best perception so that he speaks well of the city and not the opposite. It is of little use to see a very beautiful and agile airport in the procedures if you do not have full transportation service and have to walk dragging your suitcases in the street, he stressed.

For him, there is no valid reason that the last flights arriving in Mérida are not covered because now the planes come with good occupancy.

In one of the videos, you can see numerous passengers walking from the air terminal to Avenida Internacional to hire a taxi or call a platform that provides a private transport service.

“I have traveled several times and in the mornings I do not see that this situation occurs, the three concessionaires of land transport work, but from what I see the problem of neglect is in the last night flights,” he stressed.

“The arriving passengers cannot request a flatbed vehicle or call a taxi because they do not have authorization. For this reason they walk from the terminal to the avenue, it is a danger and a risk because they drag their suitcases a long way and carry their belongings, “said the president of Cetur.

Search for options in favor of the traveler

The general administration of the Mérida International Airport today ordered a first measure to resolve the lack of ground transportation at the air terminal: it authorized three minibusses of Grupo ADO to wait for the passengers of the last night flights.

Yesterday we published that every night the many travelers who arrive at the Mérida airport on the last flights experience ground transportation problems, they risk their safety and belongings because they walk a long distance to board a radio taximeter on International Avenue.

Asked about this issue, the president of Cetur, Jorge Carrillo Sáenz, said that this situation should no longer occur because there are no restrictions on vehicular mobility at night and this problem gives a bad impression to visitors.

The response of the Mérida airport administration was immediate and today it held an emergency meeting and agreed that Grupo ADO would assign three minibusses of 25 seats each to take travelers to the center and the hotel zone, which is where they request their transfer.

The minibusses will leave the air terminal and will have stops at the Santa Lucía park and the ADO stop at the hotels on Paseo 60.

The transport company has already started the procedures before the Institute of Mobility and Urban and Territorial Development (Imdut) for the authorization of the route, the permits, and the price of the passage. As soon as it receives authorization, it will begin operations and will remain indefinitely until there is a regularization in the itineraries of the flights that arrive at night in Merida.

“The truth is a complex problem due to the pandemic, there is a high percentage of contagion among the drivers of the concession companies,” revealed the general administrator of the airport, Óscar Carrillo Maldonado, interviewed about this problem.

“We are seeing this phenomenon of the pandemic with the airlines and ground transportation. There are
enough taxi units (145), but many drivers are infected.

It is the same problem that we see with the airlines that, due to a lack of available crew, are canceling flights ”.

Carrillo Maldonado explained that this contagion phenomenon causes delays in flights that come from Mexico City, two or three flights arrive at the same time to Mérida and bring 400 to 600 passengers, which even when all taxi units are available would not give to cover the unusual demand. Those are some of the different edges that are presented and that the pandemic generates.

Not just any driver can work at the airport

And not just any driver or taxi can work at the airport facilities. The driver needs a federal license, taxis must be authorized by the Ministry of Communications and Transportation and Grupo Asur grant a concession of ground transportation.

“The commercial management and administration are working on a strategy to solve this problem immediately,” said Óscar Carrillo.

“We have already authorized the ADO company to operate three minibusses with stops at three points in an emergent manner. It picks up passengers here at the terminal and will make stops at the Santa Lucía park and Paseo 60 where the
ADO terminal is located, which is where tourists request taxis to take them. With these, we would be solving the problem of travelers who arrive at night ”.

“The rate would be at an affordable price because it is a group service,” he explained. “The three minibusses have capacity for 25 passengers, with this the lack of night ground transportation would be partially resolved. However, we know that people walk to the avenue and the neighborhood, it is a very common phenomenon among passengers because they seek to pay less at the airport taxi rates. This custom of walking from the terminal to the avenue is common among passengers on low-cost flights and they also seek alternative transportation to taxis. “

Passengers walking to the International Avenue is normal

He said that this custom of walking from the terminal to the avenue to board lower-cost ground transportation is not only seen at night but also during the day. Precisely because of this phenomenon, the Mérida airport has video surveillance cameras on that route of the road, a private surveillance patrol performs patrols, and the National Guard, which has surveillance of all the interior streets of the airport, also patrols because there are travelers and workers who travel at night and even at dawn.

“The paths of the airport are well lit and guarded, there are no problems on the way if they walk, there have been no incidents or crimes in the streets of the airport,” he said. “It is common for many passengers who arrive on the flights to go out to the avenue in search of lower-cost transportation.”

According to the official itinerary of the Mérida airport, the last flight to arrive is the Aeroméxico flight at 11:50 at night. However, in recent weeks there are delays and several flights arrive at the same time, others arrive at one, two and three in the morning. At that time it is difficult for their relatives to go to look for them, it is difficult to find public transport nearby and due to the number of passengers not even the entire fleet of taxis available would cover the demand because each trip is delayed in the transfer.

“There is a greater demand for taxis in recent weeks due to the number of passengers, especially now that five flights regularly arrive after 10 at night,” he admitted.

He was asked the hours that taxi drivers who have a concession must cover. According to the service provision contract, taxis must work one hour before the first flight which is at 6 in the morning, and cover until the last flight that arrives, even if it is delayed and lands at dawn. The air terminal should not be left without taxi service.

Their obligation is to be at the terminal until the last flight arrives, but the reduction in taxis due to the contagion of drivers has generated this problem of lack of service at all hours.

“ The airport has 145 concessioned taxis. It is the same number of 2019 when there were 25% more tourists and they always had enough, ”said the administrator. “But if several flights arrive at the same time at night, even if they are all there, they will meet the demand. That is why we are reinforcing the service with the three ADO minibusses. We are doing an evaluation to find out if it is necessary to increase the number of taxis or increase the number of transport companies. We will do what is necessary to solve this problem. We will be very vigilant, we will be carrying out night operations so that the traveler who walks to the avenue is not affected ”.

He was also asked about the cancellation of flights coming to Merida.

Until now, only Aeroméxico the day before yesterday canceled one that came from Mexico with 180 passengers and today Friday it canceled two due to lack of crew. Flights do not depart if the crew is not complete, even if a flight attendant is missing.

“Every day the airlines make their evaluation and decide to cancel a route at a certain time or day due to lack of personnel, but all passengers are being served on other airlines,” he said. “They do wait two, six and up to eight hours for them to take the next flight to their destination, but the passengers are traveling.”

Óscar Carrillo said that the airline most affected is Aeroméxico due to the contagion of the crew personnel. In the first days of the year, the airline canceled a total of five flights. On December 30 and 31, a US airline canceled its flights to Mérida but has already resumed. Until today there are no cancellations on the Merida-United States route.

Tag PASS, Save time when paying at toll booths!