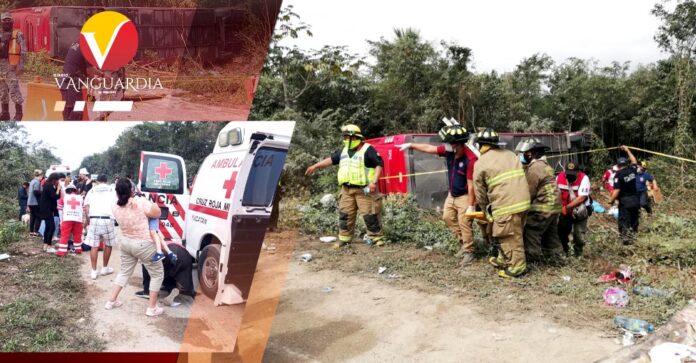 One of the four identified is of foreign origin, revealed the Quintana Roo Attorney General’s Office.

Through its social networks, the Quintana Roo State Attorney General’s Office gave the most recent report on the overturning of a passenger bus, regarding the identity of the fatalities.

In a message on its Twitter account, the Prosecutor’s Office revealed that 4 of the 8 people who died in the crash that occurred this morning, February 6, 2022, have already been identified.

This Sunday morning, a unit from the ADO company, which was transporting about 40 people, lost control, after hitting the rear of a trailer that joined the road.

The crash caused some of the passengers to be thrown, while others were trapped inside the unit.

The institution specified that three of the fatalities are women and five are men, among whom four people were identified with the initials CBCB from Campeche, LAMC from CDMX, KLHB from Quintana Roo, and JN of foreign origin.

In addition, the number 9983022702 of the FGE Victims Assistance Directorate was enabled to provide information to the families of the victims.

According to the director of Civil Protection of the municipality of Solidaridad, César Flores, at least 19 people were injured and were transferred to four municipalities of Quintana Roo, after elements from Puerto Morelos, Benito Juárez, Lázaro Cárdenas and Solidaridad came to the site. .