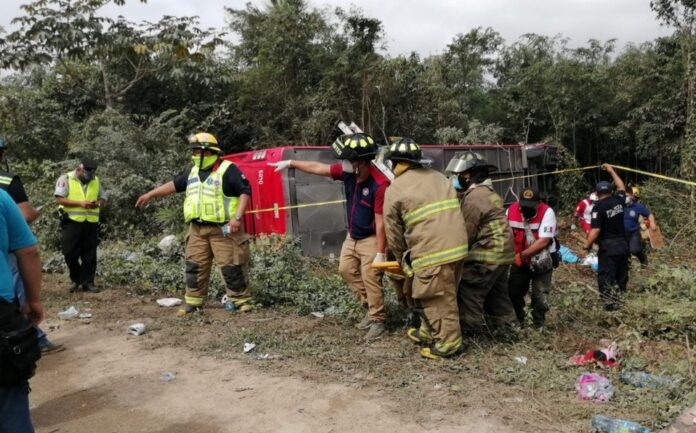 This morning, an accident was reported on the Mérida-Cancún highway at the junction with the El Tintal-Playa del Carmen highway, the number of injured is unknown, there are eight deaths.

It is reported that among the deceased is a girl and foreigners and the people who were injured were taken to hospitals in Cancun, Valladolid, Playa del Carmen, and Puerto Morelos.

According to preliminary reports, eight people died and 19 were injured, after a bus from the ADO line ended up overturned on the Mérica-Cancún toll road at the junction with the El Tintal-Playa del Carmen road, the morning of this Sunday.

The accident occurred after 10:30 am, at kilometer 242 of this highway, for reasons still unknown.

Ambulances, firefighters, and other authorities from Cancun, Playa del Carmen, and Lázaro Cárdenas were mobilized to the place, pointing out that there are many people trapped inside the unit and others crushed.

The entire area was cordoned off so that the rescuers could carry out their work, which included removing the bus driver, pressed inside the unit.