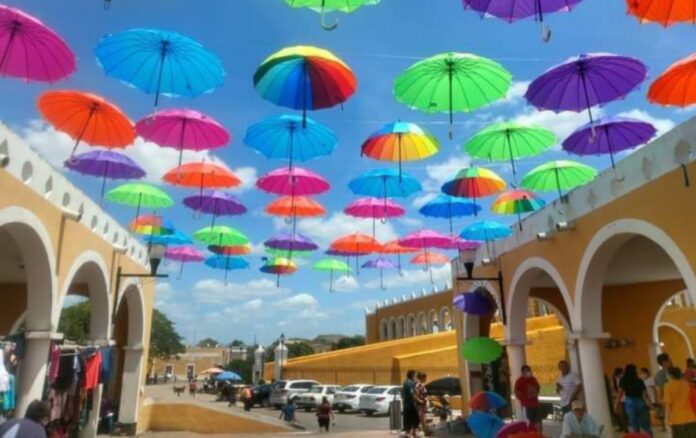 They throw them in the garbage cans of the central market.

IZAMAL.— The tourist attraction of the colored umbrellas that the City Council hung in the municipal market of this city did not last a month because for a few days they were thrown in the garbage cans of the supply center, in the middle of the main square of this Magical Town.

It was last April 14, Holy Thursday, when the roofless esplanade of the market wore orange, purple, green, blue, Mexican pink and multicolored umbrellas for the first time, similar to those set up in mid-March in the main park. of Tizimin.

Since that Holy Thursday and until a few days ago, Izamaleños and national and foreign tourists took photographs in the so-called passage of the umbrellas, especially selfies, to publish on social networks.

Even some national visitors praised the attractiveness of the umbrellas.

Why didn’t the passage of the umbrellas last in Izamal?

Despite the beauty of the attraction, the rains and winds of recent days knocked down the umbrellas.

For a few days the umbrellas have been in the garbage cans of the municipal market and yesterday several people came to check if any of them could be of use to them.

“I go to see if any work and I repair it to take it home; it’s good to cover yourself from the sun’s rays that are hitting; It can be repaired, although it won’t take long, but it helps us to cover ourselves from the sun,” said a neighbor.

It was too much to ask that they last for months

Another person said that “that’s how the shady ones had to end up, in the garbage, because in May there is a bit of strong air and rain; at the time it was attractive, but it was too much to ask that they last for months; the first big rain in April at the end of the month deteriorated them and then another one fell and that’s it: it hit them… the attraction”.

Another inhabitant who was in the market yesterday questioned: “ How much did the attraction that ended up in the trash cost? Now, not even the shadow of what the umbrellas were, a little bit of water and everything invested went into the trash, but you couldn’t ask for more from something that would end that way.”