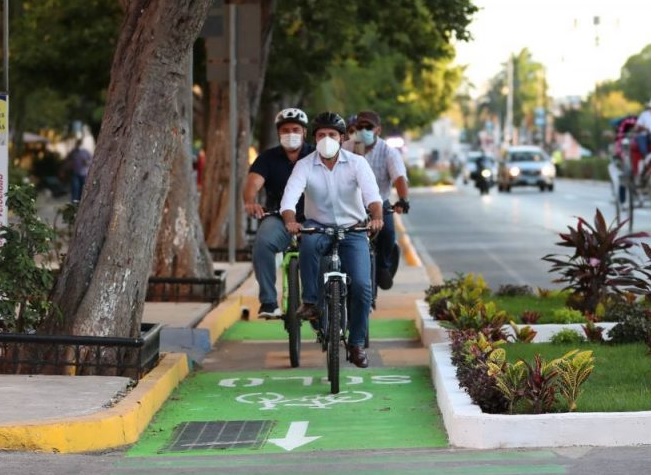 People who move by bicycle through Paseo de Montejo now have the adequate road infrastructure to make trips more agile, but above all safer, after Governor Mauricio Vila Dosal and the Mayor of Mérida, Renán Barrera Concha delivered the works of the bicycle lane in this emblematic avenue, which are part of the 71.7 kilometers that are being carried out within the Ciclovías Infrastructure Plan.

Vila Dosal and Barrera Concha inaugurated on this day the construction and implementation of bicycle lanes in this point of the city and it is considered within the first intervention front, where cyclists can now enjoy safer and more orderly environments in their transfers, thus that progress is being made towards a sustainable, inclusive Mérida with safe urban mobility to protect the lives of pedestrians, cyclists and people with disabilities.

Aboard bicycles, the Governor and the mayor of Merida traveled the section of the bike path on Paseo de Montejo, where they corroborated the signage and how safe it has become to circulate within this new infrastructure in one of the busiest roads in the Yucatecan capital.

It should be remembered that, with the Ciclovías Infrastructure Plan, the State Government, in coordination with the Mérida City Council, is building a total of 71.7 km of cycling infrastructure, through an investment of 111 million pesos, as well as the generation of 280 direct and 700 indirect jobs. These new roads will allow Yucatecans to travel short distances in less time without polluting the environment and promoting a healthy lifestyle.

This project comes to reorder the public space, currently dominated by motorized transport, providing greater security to those who travel on foot or by bicycle, while, with the cycling infrastructure generated by it, represents a savings opportunity for many families, since by privileging the use of the bicycle, the expenses of public transport or those generated by a car, such as insurance, fuel and maintenance are saved.

After completing the tour, Vila Dosal and Barrera Concha listened to the technical explanations of the works by the director of the Institute for Mobility and Urban Territorial Development (Imdut), Aref Karam Esposito, who specified the meaning of each of the elements of the signage.

In turn, Mayor Renán Barrera said that the bike path on Paseo de Montejo, in addition to being one of the most important and transcendent projects in the city, provides the people of Merida the security of being able to move safely, coexisting in modes of transport and using public space in a harmonious way.

“At the time, as Mayor of Mérida and now Governor, Mr. Mauricio Vila, has worked on a vision of sustainable urban mobility for Mérida and the state expressed in the PIMUS, which the City Council is supporting so that in 2040 as the document indicates, Mérida consolidates an integrated mobility system that guarantees everyone the right to the city, ”he said.

“Today Mérida and Yucatán are taking another step towards intermodality, that is, to the transferability between all modes of transport in the city, with efficiency, coverage and connectivity, with an action plan that is constantly updated to to be at the forefront in this section ”, he added.

For his part, the head of the Ministry of Public Works (SOP), Virgilio Crespo Méndez, explained that in Paseo de Montejo the works consisted of the placement of 7,328 reflective buoys, the application of thermoplastic paints on pavements, as well as Brazil green color. on the bike path, logos such as arrows, bicycle crossing, people with disabilities, preferred lane, among others, were painted.

Likewise, Crespo Méndez indicated that the work also included the arrangement of roundabouts in the area known as El Remate, Felipe Carrillo Puerto and Justo Sierra, where tasks were carried out to privilege pedestrians and cyclists.

In this framework, the head of the Public Security Secretariat (SSP), Luis Felipe Saidén Ojeda, explained that, as part of the efforts being made by the State Government in terms of mobility, at this point there are also synchronized smart traffic lights from the C5i of the police with an adaptive traffic control system in real time, which is achieved through modern controllers.

There, Saidén Ojeda explained that the installation of this modern technology is part of the Joint Program for the Improvement of Mobility and Road Infrastructure in Mérida, carried out by the State Government with the Mérida City Council. There are 307 control boxes that are being installed in the city, which have conflict detectors, which help prevent accidents.

Also, the state official pointed out that 2,616 pedestrian traffic lights are being installed, which will be added to the 853 currently existing, making a total of 3,469 throughout the city, which will have 166 doppler GPS, which will come into operation to analyze traffic in arteries, to streamline it and avoid congestion.

This day’s delivery consisted of 1.6 kilometers of the 15 that the Paseo de Montejo-Entronque Dzibilchaltún section includes. Once ready, the 15 kilometers of bike lane will connect with the 17 already existing, thus adding more than 30 kilometers of continuous track. It will cover streets from the Paseo de Montejo auction to said junction, passing through Prolongación de Montejo and the Carretera de Progreso, in addition to connecting several existing bicycle lanes such as Dzibilchaltún, Komchén and Temozón.

It is worth mentioning that, in total, through the Ciclovías Infrastructure Plan, the following sections are being intervened: Paseo de Montejo-Entronque Dzibilchaltún, 15 kilometers; Northeast Zone, 21.15 kilometers, North of Mérida – Ucú, 15.5 km and South Zone, 20 kilometers.

The event was attended by the founding member and director of Cicloturixes, Everardo Flores Gómez, the federal deputy Elías Lixa Abimerhi; as well as the representative of the Business Coordinating Council, Jorge Iglesias Bermúdez.