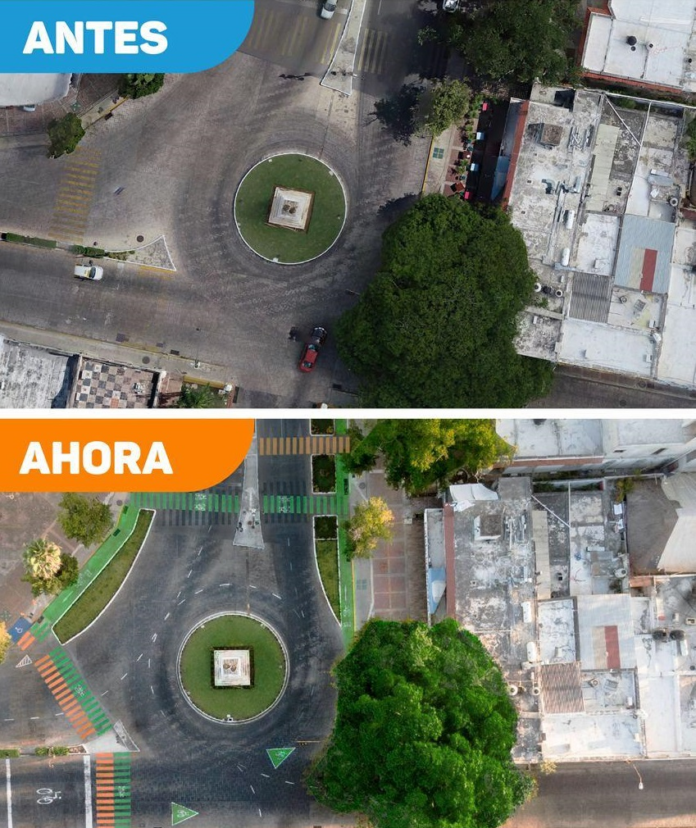 They implement signage for pedestrian and bicycle crossings

The roundabouts of the monument to Justo Sierra and the area known as El Remate on the Paseo de Montejo have a new road design that contributes to a more agile and safe mobility for all after the intervention works at these intersections as part of the Plan of Ciclovías infrastructure promoted by the Mérida state government and city council.

The Institute of Mobility and Territorial Urban Development (Imdut) pointed out that this type of works is helping to improve vehicular flow since they serve to order the traffic of all users and are essential to reduce pedestrian crossing times and avoid road events during the interaction and coexistence of motorized and non-motorized vehicle users.

The state official explained that in the roundabout of the monument to Justo Sierra, reflecting buoys were placed, the formation of ridges with land and garden, signage with paint and vertical signage for the “bicycle crossing” and for people with disabilities, the intervention on sidewalks, ramps and sidewalls with white paint and the application of thermoplastic paint on pavement with a green, yellow and white stripe and Brazil green paint on the bike path.

Meanwhile, for the roundabout of the Remate de Paseo de Montejo, in addition to the elements that the Justo Sierra has, in this square is added the parking equipment for bicycles, stops for public transport and tourist transport, and boxes for vehicle parking. In addition to vertical signage with the legends “Cycle path begins”, “Cycle path ends” and “Cyclist crossroads” and with paint, the lane with cyclist preference will be distinguished.

As was done in the recently completed roundabout located in the Monument to Felipe Carrillo Puerto, prior to the beginning of the physical work, tests were carried out with orange cones, to ensure the efficiency of the proposed design.

“The cones are temporary tools that serve to mark the places where the bicycle lanes will be, the islands with vegetation and all the new signage, so they were removed when the works were finished and the areas are already enabled for their operation,” said Karam Espositos.

The holder of the Imdut explained that with the new road design of two continuous lanes and the integration of the intelligent traffic light system, mobility in this area will be more efficient, it will reduce times of crossing pedestrians, cyclists, and motorists, it will reduce the risk of traffic events, making up a more agile and safer mobility for the Yucatecans.

With the new road infrastructure, a positive impact on society is generated not only in health but also Mérida will have mobility that, among other things, will make transfers more efficient and economical, will order circulation to avoid the chaos of our roads, respecting the pedestrian and the cyclist, implementing and promoting the use of alternative means of transportation, providing security to those who use these means, respecting the natural environment, favoring universal accessibility, the state official concluded.

Recently, the governor Mauricio Vila Dosal and the mayor of Mérida, Renán Barrera Concha, traveled the first section on this emblematic avenue of the Ciclovías Infrastructure Plan, with which 71.7 km are built, a project that contributes to reordering the public space, currently dominated by motorized transport, providing greater security to those who move on foot or by bicycle.