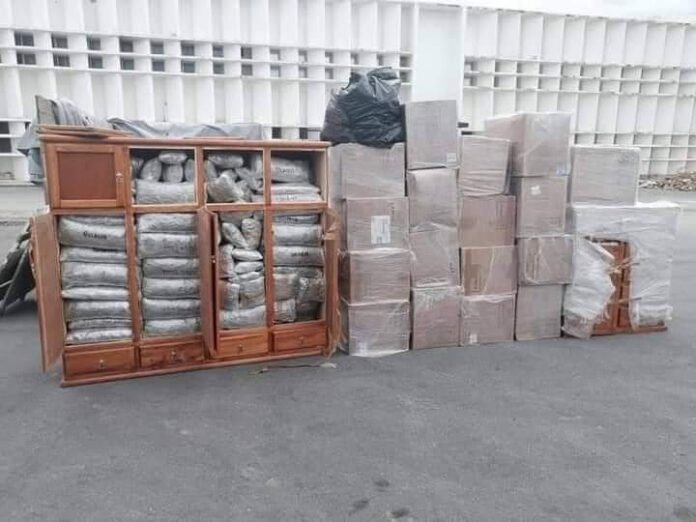 450 kilos of marijuana and 15 kilos of methamphetamine (crystal) were seized by elements of the Ministry of Public Security (SSP) of Yucatán when two men were found in possession of them on the Mérida-Campeche highway.

Disguised as a moving van, two people were transporting the cargo hidden in two closets and boxes of toppers, without thinking that they would be searched by police officers.

When trying to cross the SSP checkpoint and surveillance, the uniformed men stopped the white truck, stake type, with plates of the State of Mexico and, noticing suspicious attitude of its crew members, decided to review it.

But the agents of the Yucatan SSP applied the entity’s security protocols and proceeded to review the shipment. This is how they realized that various packages with marijuana and glass were hidden among the furniture and objects.

Regarding the facts, the SSP reported the following, omitting details that they are military:

The drugs were hidden in two wooden wardrobes and in cardboard boxes transported in a van with plates from the State of Mexico, simulating a move.

However, with the support of a canine officer, which did the marking of the truck, the state police conducted an exhaustive review and confirmed the contents of the furniture and boxes.

Agents of the Ministry of Public Security arrested the driver J.C.R.M. and his companion D.W.P., both 38 years old, from Tabasco and Puebla, respectively, who, together with the vehicle and the drug, were placed at the disposal of the Attorney General’s Office (FGR).