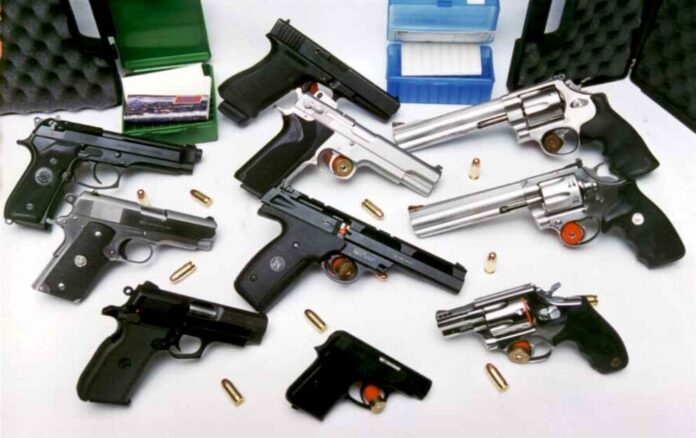 In the application you can find galleries of weapons and municipalities in existence, as well as information to make purchases or registrations

” The Law Federal Arms and ExplosivesIt indicates in article 9 that weapons of the following characteristics may be possessed or carried, under the terms and with the limitations established by this Law : semi – automatic pistols with a caliber not exceeding .380 (9mm.), with the exception of pistols. .38 Super and .38 Comando calibers.

” Revolvers in calibers not superior to the .38 Special can also be carried , with the exception of the .357 Magnum caliber. On the other hand, ejidatarios, cumuneros and farm laborers, outside urban areas, may possess and carry with the sole manifestation, a weapon of the aforementioned, a .22 caliber rifle or a shotgun of any caliber, except those with a barrel length less than 635 mm. (25), and those with a caliber greater than 12 (.729 or 18. 5 mm.) “.

The Ministry of National Defense applied the technology and already has a mobile application in which you can find information on the sale and registration of weapons, as well as existing catalogs.

The Armament and Ammunition Marketing Directorate, dependent on the Military Industry General Directorate , is the agency in charge of carrying out the commercialization of firearms, ammunition and other objects regulated by the federal law on firearms and explosives, in attention of public and private security forces, hunting clubs and individuals that meet the requirements established in the applicable laws and regulations

It is important that you know that all acquisitions are made in person at the facilities of the Armament and Ammunition Marketing Directorate, located on the ground floor of the main building of the General Directorate of Military Industry, with address at Avenida Industria Militar number 1111, Colonia Lomas de Tecamachalco, Municipality of Naucalpan, State of Mexico, CP 53950, so neither through the official website of the Sedena nor in its mobile application, you will be able to acquire the weapons that you see in the catalog.

This comes up because some users of the application indicate that this process cannot be done and that downloading the app is just a waste of time and data, however, there are others that highlight the information that is provided and the possibility of Let this be first-hand and practical.

Photo 1: Notice from Sedena on the process of sale and registration of firearms

The mobile application of the Sedena you will see galleries, stocks, requirements, records, among others, enter here and download it

The inhabitants of the United Mexican States have the right to possess weapons at home, for their security and legitimate defense, with the exception of those prohibited by Federal Law and those reserved for the exclusive use of the Army, Navy, Air Force, and National Guard.

In order to eradicate the illegal purchase of Firearms, the Armament and Ammunition Commercialization Directorate, dependent on the General Directorate of Military Industry, is in charge of carrying out the commercialization of firearms, ammunition, and other regulated objects. by the federal law on firearms and explosives, in the attention of the public and private security forces, hunting clubs, and individuals who meet the requirements established in the applicable laws and regulations.

The Secretariat of National Defense informs that in addition to complying with the documentation that was already required, the interested party must present a psychological medical certificate

The Secretariat of National Defense , through the command of the III Military Region and the 9 / a. Military Zone , informed the public that in order to have greater control to combat the problem in the use of firearms, it will be necessary to present a medical-psychological certificate.

This new requirement must be attached to the application for the acquisition of Weapons, Cartridges and / or Accessories, which will be available as of August 1, 2020, on the Internet page: www.gob.mx/sedena/acciones -and-programs / arms-trading .

Just remember that all purchases are made in person at the facilities of the Armament and Ammunition Marketing Directorate, located on the ground floor of the main building of the General Directorate of Military Industry.

Worried about getting your RFC by the deadline here in Mexico? I have some great news for you