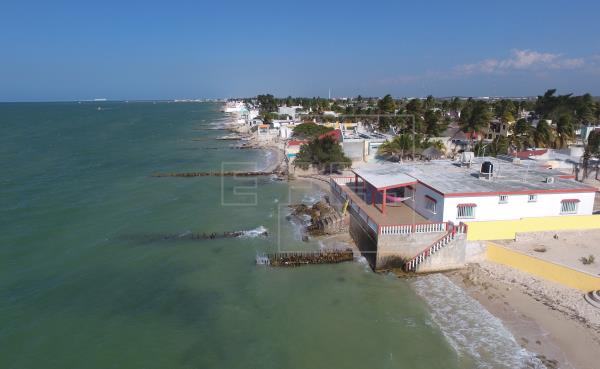 The loss of coastal territory, especially beaches, is a phenomenon that has long affected countries with coasts. About 70% of the beaches in the world are in decline due to a combination of the effects of natural forces and human interventions

The beaches of Yucatán are not immune to the problems associated with coastal erosion and have undergone several changes in recent decades due to high population growth and the development of infrastructure on the beach. Additionally, Yucatán is a vulnerable region to the development and passage of hurricanes that can cause dramatic changes in the coastal zone; Such is the case of hurricanes Gilberto (1988) and Isidoro (2002) that caused great erosion on the beaches in Chelem, Chuburná, Progreso and Chicxulub.

Different studies carried out in the region indicate that the coastline in Yucatán presents rates of retreat of between 0.3-0.6 to 1 m per year2. This has led to the implementation of different actions or programs for the protection and recovery of beaches (eg breakwaters, breakwaters, and small beach fillings) by the government and local inhabitants that have had little or no success in adversely influencing the movement of sand in the beaches

A census of coastal structures carried out within the framework of this project made it possible to identify in the first 16 km east of the Progreso pier only 400 “coastal protection” structures built by residents without any engineering base. The following graphics illustrate the different types of structures and the materials commonly used for their construction.

Several experts are calling for a moratorium on the construction of new beachfront structures until a new set of guidelines can be put in place.

State authorities are reporting that this week alone, they have documented 272 artificial barriers built by homeowners in an attempt to keep rising waters at bay.

But experts say that these barriers, which extend along the coast, do more harm than good and are also illegal.

“We need a new set of standards to address the problem, as honestly efforts so far have not only been unsuccessful but have actually made the problem worse,” said Pedro Castro Borges of the CInsvestav research institute.

The problem of beach erosion has become particularly severe in beach communities such as Telchac, where a great many beach homes are now showing signs of weakening structural integrity.

The most obvious of these signs include exposed foundations, large cracks, and fissures, as well as the displacement of large volumes of sand by the ocean.

“People obviously want to be able to look out their front door and see the ocean right there. Nobody really thinks this will cause them problems down the line until it does,” said Castro Borges.

But the problem is multi-dimensional and caused by a series of separate but interconnected causes including climate change, irresponsible construction practices, and “band-aid” solutions like barriers.

The problem is also worsened by the destruction of coastal ecosystems such as wetlands and mangroves that combat the effects of erosion. These ecosystems are also important in that they protect the coastline from tropical storms and hurricanes.

But the problem is serious, he assured.

The Secretary of Urban Development and Environment explained that to combat beach erosion “we have already removed more than 150 spurs (installation of wooden stakes on the beach), we placed others, we ordered some more, and we dragged movements of more than 14,000 meters cubic sand “.

More than 100 summer homeowners are supporting the beach restoration and conservation project, monitoring their condition.

To try to reverse the problem, the head of Seduma calls on those affected: “not to act desperately, to approach the Secretariat and join the working group made up of universities and research centers, as they carry out permanent monitoring “.

The official asked the owners of summer houses and municipal authorities “not to remove the vegetation, to build behind the first dune, to protect those first dunes.

What is the Federal Maritime Terrestrial Zone?

The Federal Maritime Terrestrial Zone is a twenty-meter-wide strip of land, passable and adjacent to the beach.

Now, in order to understand it better, we must know that the beach is the part of the land that, due to the effect of the tide, cover and reveal the water. (art. 7 ° fraction IV of the General Law of National Assets).

Likewise, when the coast lacks beaches and has rocky formations or cliffs, the Secretariat will determine the federal maritime-terrestrial zone within a 20-meter strip contiguous to the marine coastline, only when the inclination in said strip is 30 degrees or less in Continuous form. (Art. 4 of the Regulation for the use and exploitation … of the ZOFEMAT …).

The verification of the use, exploitation, and exploitation of the ZOFEMAT, maritime beaches, and land reclaimed from the sea, administered by the Ministry of Environment and Natural Resources (SEMARNAT), is the attribution of PROFEPA and is strategic due to the large extension of coastlines with which the country counts, as well as the richness of its natural resources and the importance of the ecosystems it houses.

The profile of the coast is represented below when there is a federal maritime land zone.

On the other hand, it is also important to know what land reclaimed from the sea is since the verification of its use is also the responsibility of PROFEPA. Thus, it is the land area between the limit of the new Federal Maritime-Terrestrial Zone and the limit of the original Federal Maritime-Terrestrial Zone, in accordance with article 125 of the General Law of National Assets. ( NOM-146-SEMARNAT-2005 )