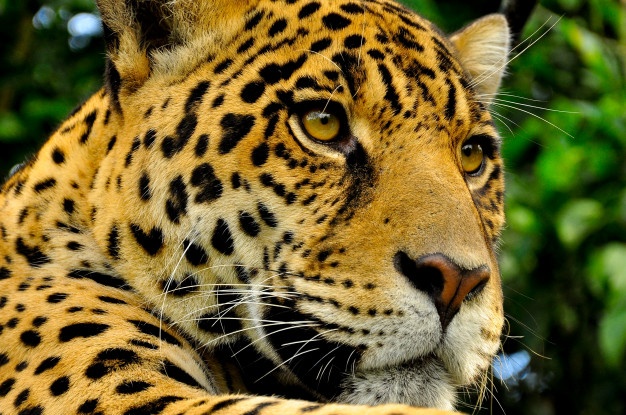 The jaguar population in Mexico increased by about 800 animals from 2010 to 2018, according to the first two censuses of the elusive carnivores ever conducted in the country. The news confirms that Mexico’s national strategy to protect jaguars is working, researchers reported recently in the journal PLOS One.

“It was incredible to see jaguars in so many places where there weren’t any before,” said ecologist Gerardo Ceballos of the Universidad Nacional Autónoma de México, founder of Mexico’s National Alliance for Jaguar Conservation and lead author of the paper.

The jaguar (Panthera onca), listed by the IUCN as Near Threatened, ranges from northern Mexico through Central America, the Amazon Basin, and northern Argentina. Ecologists had never properly counted jaguars in Mexico before, making it difficult to design a conservation program in the iconic cat’s northernmost ranges. The alliance created by Ceballos and his colleagues used the results of the first Mexican jaguar census in 2010 to create a national strategy endorsed by government policy and scientists alike.

Morato, head of the National Predator Center at the Instituto Chico Mendes de Conservação da Biodiversidade in Brazil. He was not involved in the study. “They are connecting science with conservation plans. It can be a good model for researchers—not only working with jaguars but all the other big cats or other species that are critically endangered.”

Ceballos and a team of 20 ecologists spanning the country gathered data from photo capture traps to determine where jaguars lived and how many roamed in each of the country’s protected conservation regions. Then, they created a plan to tackle the most critical issues affecting Mexico’s jaguars: preserving wildlife corridors and sanctuaries; advocating for helpful laws and public policy, and avoiding or resolving conflicts with livestock owners.

For example, the government paid people living near protected areas to not deforest sanctuaries, compensated them for cattle losses from jaguar predation, and provided electric fences to prevent jaguars from killing livestock. The on-the-ground efforts paid off.

“Local people have been critical,” Ceballos told Mongabay. “When they have the funding and incentives to protect the forest, they become the most important ally.”

Ceballos expected jaguar populations to stay the same or decrease between 2010 and 2018. Instead, estimated numbers rose by 20%, from roughly 4,000 to 4,800 animals. Mexico’s Yucatan Peninsula hosts about 2,000 jaguars, with others spread throughout coastal and inland habitats across the nation. Brazil hosts the largest continuous jaguar habitat today, with an estimated population of more than 10,000 individuals

Moving forward, the National Alliance for Jaguar Conservation will focus on key threats, especially conflicts with humans and habitat loss.

Morato notes that other wildlife and ecosystems will benefit from these efforts.

“The jaguar is an umbrella species,” Morato told Mongabay. “They need a large amount of area, so if we need to protect a viable population of jaguars with at least 50 individuals, we are going to have many other species protected [within that area].”

In 2022, the Mexican government and the National Alliance for Jaguar Conservation plan to expand the Calakmul Biosphere Reserve in the southern Yucatan Peninsula from 723,185 hectares to more than 1.3 million hectares of land, making Calakmul the largest protected tropical forest north of the Orinoco River—all motivated by jaguar conservation.

“It’s very unusual that scientists can do all these things: research, outreach, conservation, and public policy,” said Ceballos. “And in Mexico, we have been able to do that.”

ALAMOS, Mexico – This is a “pueblo magico” (magic town), rich in beauty and cultural and historic significance. It’s also near an important ecological crossroads in the foothills of the Sierra Madre Occidental.

The foothills are home to the northernmost tropical deciduous forest in the Western Hemisphere, and it’s a critical connection point between jaguars that roam Sonora and its neighboring state, Sinaloa, said Ramon Ojeda, who is the geographic information system coordinator on the nearby Reserva Monte Mojino.

The reserve is a 16,000-acre patchwork of former ranches pieced together to make a private reserve.

“What we’re trying to do is bring the level of conservation to a stricter level than they have in the federal protected area,” Ojeda said.

Because even most federally protected land is privately owned in Mexico, the government can only provide certain protections. For example, cattle ranching and some mining are being allowed in the protected area. On the private reserve, Ojeda said, those kinds of human incursions are kept out.

Until a few years ago, he said, researchers thought jaguars only passed through here. But they started a monitoring program in 2014, and three years later, one of the camera traps snapped a photo of a pregnant jaguar, La Meche. That’s a sign of a resident population.

As we hiked through the dry undergrowth to the spot Meche was photographed, park ranger Alejandro Sauceda said the endangered big cat was photographed for three consecutive days in 2017. 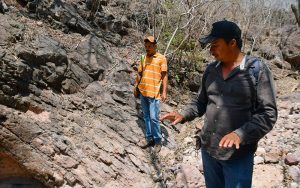 Alejandro Sauceda (right), who has been a ranger on Reserva Monte Mojino for a decade, has never seen a live jaguar. (Photo by Kendal Blust/KJZZ)

“It was the first days of April,” he said. “And she was right here, by this little pool of water.”

Sauceda has been a park ranger on the reserve for 10 years after the ranch he used to work on was purchased by Reserva Monte Mojino. He has never seen a jaguar, he said, but he knows they’re here, both residents and visitors passing through.

“If connectivity between Sinaloan jaguars and the northernmost jaguars in Sonora is broken, in the worst-case scenario, the Sonoran jaguar could become isolated,” Ojeda said.

Cut off from genetic diversity, they would become vulnerable and eventually die out, he said, adding, “that would destroy the hopes of the United States that someday jaguars would return to Arizona.”

“The only corridor that currently has no population at the end of it is the one in Arizona,” agreed Howard Quigley, director of the jaguar program director and conservation science executive director for Panthera, a global wild cat conservation organization. He also was co-lead on a U.S. Fish and Wildlife Service jaguar recovery plan released in April. 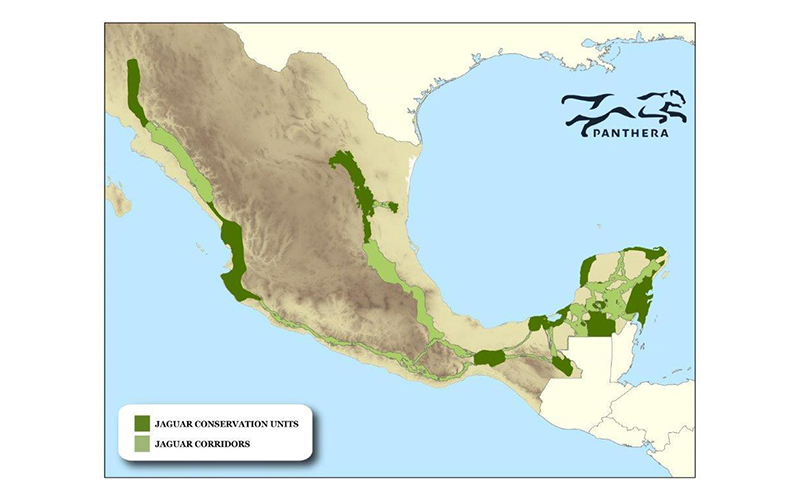 The problem is, right now there are limited protections in the Sinaloa corridor between Reserva Monte Mojino and a jaguar reserve in central Sinaloa, said Quigley, who calls it a “no-man’s land between Mazatlan and Alamos.”

Another problem: President Donald Trump’s pledge to build a wall on the U.S.-Mexico border.

Back in Alamos – a UNESCO World Heritage Site brimming with Spanish colonial buildings – Lydia Lozano drives around town showing off colorful murals of jaguars painted on the walls of schools, restaurants, and other buildings. They’re part of the annual Dia del Jaguar, or Jaguar Day celebration, each October.

“You know, if you want to protect your jaguar population in Arizona, whether it’s one, two or three jaguars, you have to work with Mexico. And that’s reality,” said Lozano, Mexico director for Nature and Culture International, a San Diego-based organization that runs Reserva Monte Mojino. 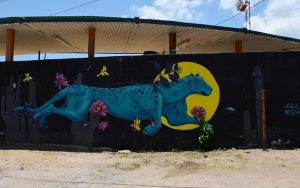 Corazon, a jaguar that was killed near the Northern Jaguar Reserve, graces a wall in Alamos, Sonora. (Photo by Kendal Blust/KJZZ)

The few jaguars that are seen roaming Arizona have to be able to cross the border to breed, she said. The Fish and Wildlife Service recovery plan included at least two places where jaguars can cross the border.

Many biologists would like to see many more borderland corridors safeguarded from additional border barriers.

“So you have this jaguar recovery plan made in the U.S., but everything has to be done in Mexico,” Lozano said.

“And it’s pretty obvious, but that’s how you know that we’re all connected. You’re talking about a species that has been forever connected through America. I’m just happy to find these partners that do understand that having a wall, it’s unnatural.”

Lozano said for a long time conservation organizations had limited collaboration in Mexico because of stiff competition for resources. But she believes partnerships, whether they’re between the U.S. and Mexico, or Sonora and Sinaloa, are the best way to protect the jaguar across its northern range.

“I think NGOs (non-governmental organizations) and also donors are shifting into the vision of protecting something bigger than just dots on a map,” she said.

Instead, they’re finding ways to share information and skills between groups and between isolated reserves, slowly stitching together pieces of the jaguar corridor.

“It’s at a very small scale compared to the jaguar corridor,” she said. “But it’s working.”

Jaguars’ numbers remain low throughout Mexico – there are only an estimated 4,100 in the entire country – and it could take decades for their numbers to reach healthy levels, Lozano said.

Conservation and species recovery, she said, are long-term commitment.

Guananí Gómez-Van Cortright is a graduate student in the Science Communication program at the University of California, Santa Cruz. Other Mongabay stories produced by UCSC students can be found here.