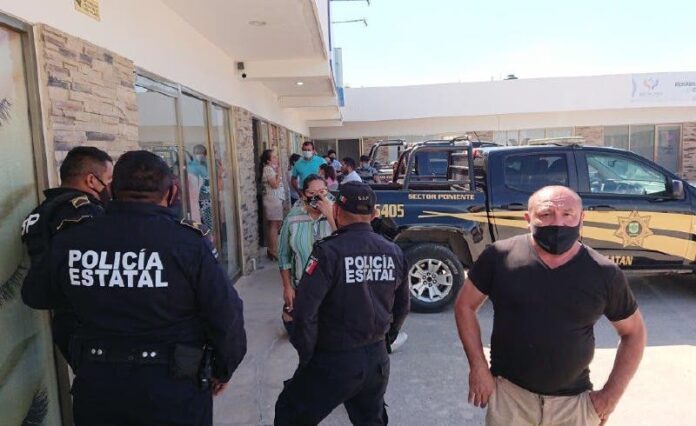 The false financiers who have scammed hundreds of Yucatecans in recent months do not hesitate to resort to the threat when their clients begin to suspect something irregular or protest against the demand for money before the supposed release of a loan.

” Well, read your contract very well “, is a phrase widely used by the representatives of that network of fraudsters, according to testimonies collected by Central 9 , Grupo Megamedia’s Journalistic Investigation Unit.

Neither has there been a lack of hasty flight of some of these criminals when they were caught in their illegal acts.

In recent weeks, as we have already widely published, the “companies” Aricent Servicios (Capital Montejo) and Integral Financial Projects have been the target of numerous complaints that are in the hands of the State Attorney General’s Office (FGE).

These fraudulent firms operated out of rented offices and apparently, their main “executives” are no longer in Yucatán, but continue to be in contact with some of their victims by telephone, whom they continue to extort.

Last Tuesday we published the case of a merchant who was interested in a loan of one million pesos, for which he would pay — according to the promise they made him — an interest rate of 7% per year.

An “executive” of Aricent Servicios who said his name was Alfredo García informed him that he had been authorized 970,000 pesos, but first he would have to deposit $ 90,000 as a bond or “average balance.”

Once that money was delivered, they sent it to Integral Financial Projects. They cared for him “Gerardo Rodríguez” and “Alejandro Alcocer”. The first indicated that, due to his good financial references, they could increase the loan to two million pesos, with the same interest rate.

They provided him with the bank account for the deposit, in the name of C&A Transportes Diversos. Once the transaction was consummated, they told him, the two million pesos would be transferred to him.

With loans from friends, the merchant raised the amount. Once the deposit was made – which raised his total contribution to 268 thousand pesos – he appeared before “Gerardo Rodríguez” and “Alejandro Alcocer” , who told him that only a payment of $ 98,000 would be missing , for “life insurance”.

The client protested and said that he was not in a position to make a new delivery of money. The fraudsters “advised” you to make the payment because otherwise you could lose all your resources. And immediately the threat: “Well, read your contract very well.”

Supposedly, the contract excludes the “financial” companies from responsibilities.

The merchant sought the advice of a lawyer, who pointed out that the contract is not valid and that the alleged signing company is not duly incorporated and does not meet other legal requirements.

Then the affected person went to the offices of Integral Financial Projects, in Yucatán avenue, and was attended by “Alejandro Alcocer.” Faced with the complaints, he became very nervous and made several phone calls.

The client indicated that he would not leave the place until his money was returned. The “executive” replied that there would be no problem, that they would comply with the return, and entered his office, but soon after he ran out, went to the parking lot and, according to the informant, boarded the car plates YWE-862-C, I already expected it. In the same vehicle was the “secretary” of the “company”.

Moments later other people arrived who have also been scammed. They went to the administration of the building (number 555) and a person who identified himself to them as the owner said that he is oblivious to the events, since he only rented the offices (To be continued).

Denunciation of the Way of the Cross

Victims of false finances face many problems of a legal nature.

In addition to losing money, it is not easy for them to prove the crimes against them because fraudulent companies try not to leave a trace, the signatures that appear on the documents are not accompanied by names and the alleged executives never show their real identity. Under these conditions, the “contracts” they sign are invalid.

One of those affected, who was deprived of more than $ 260,000, has contributed to the State Attorney General’s Office including the license plates and characteristics of the vehicle in which representatives of one of the fraudsters fled. Four months later, no progress is known in the investigation. License plates are local.

And the rental contracts?

An important piece of information that the authorities can have access to are the lease contracts that criminals sign, since they are supposed to be made before a notary public and with the identification of the tenant.