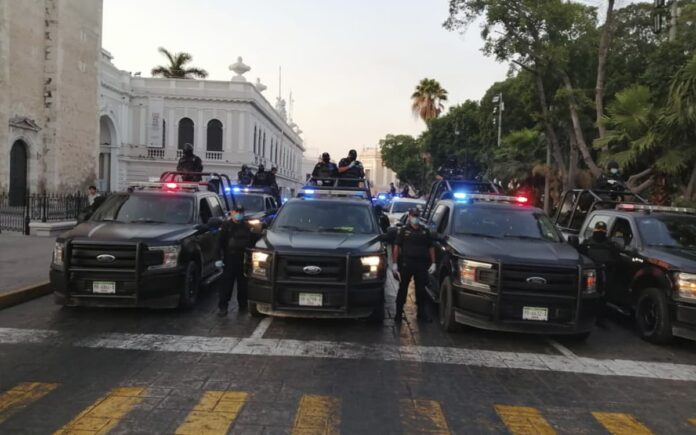 The Yucatecan security model involves serious human rights violations, is authoritarian, and has failed to stop the decomposition of the security of Yucatecans.

The most recent governors of Yucatan have boasted to the four winds that they govern the “safest state.” The President took them at their word when he put the Yucatecan security model as a reference and an example to be followed by other states.

But according to an investigation released by the Collective for the Analysis of Security with Democracy (Casede), it would be a mistake to take them at their word.

Although Yucatan does not have the levels of homicides of other entities, the narrative of peace in that state is, at best, a myth. The Yucatecan security model involves serious human rights violations, is authoritarian, and has failed to stop the decomposition of the security of Yucatecans.

Let’s start with human rights violations. According to the Casede report, entitled La Paz as a Myth: the Unsustainable Model of Public Security in Yucatan, police forces in Yucatan routinely use torture.

In 2018 alone, the average would have been one case per day. During that same year, 215 complaints were registered for arbitrary or illegal detentions and 187 for injuries. The complaints include, in addition to torture, inhuman, cruel, and degrading treatment.

This phenomenon occurs in total impunity. Dr. Jorge Fernández Mendiburu, professor and lawyer for the organization Indignation, put it in all his letters during the presentation of that report: during the last three years around 900 cases of torture have been registered in Yucatan, but there are no judicialized files corresponding.

The use of torture in Yucatan is not only routine; it is also systematic. Casede’s research indicates that we are dealing with a mechanism whose use is usually aimed at extracting information. In particular, it seeks to make people accept an alleged guilt in a crime or to incriminate third parties in the commission of illegal acts.

But sometimes this system gets out of “control”. The report indicates that last year there were at least 10 deaths of people in the custody of the State, caused by the violent way in which they are detained and subdued.

The Casede report shows that the impunity with which this system is applied is mainly due to three closely interrelated factors.

(1) In Yucatan, the Ministry of Public Security has become a sort of “superpower.” Governor Mauricio Vila has not publicly commented on the human rights violations committed by this corporation, but various debts have been authorized to provide it with additional multimillion-dollar resources.

(2) In Yucatan there is a logic of pre-democratic government. The institutions that should limit the power of the SSP and hold it accountable, such as the Attorney General’s Office and the Human Rights Commission of the State of Yucatan (Codhey) are totally bent on what the governor in turn decides. It is clear that if there is a superpower, then institutions like the previous ones will also bow to it.

(3) The business chambers, the only organized civil society group that Mauricio Vila listens to, have opted to strengthen this superpower. The document shows that these organizations would have asked Mauricio Vila to ratify, for the fourth time, the current head of the SSP. Its owner has been in the post for almost 20 years and has worked with PRI and PAN governments.

The security model is deeply undemocratic. It is because it depends on the placement of the SSP above a democratically elected government. And, therefore, above the control, transparency, and accountability mechanisms to which that government may be subject.

According to the document, to this we must add that proof of that power is that the opposition and the press rarely criticize the work of the security secretariat and its head and, when they do, this happens indirectly and subtly. .

In this sense, Dr. Raúl Benítez Manaut, president of Casede, was forceful during the presentation of the report to the press and the general public: we are facing a public security system that is totally authoritarian; Yucatan has a police model in the style of the Mexican 20th century. “Yucatan has a low homicide rate, but the price you pay for it is intolerably high.”

A good part of the people who live in Yucatan have agreed to pay this cost. Thanks to reports in the local and national press and first-hand testimonies, a good part of the Yucatecans at least intuit the state of things described. But in that state there is a narrative that giving the police a wide berth to do and undo as they please is necessary, and therefore permissible, to preserve peace in that state.

Casede’s research shows that a reading of this nature is profoundly mistaken.

The report recovers alarming statistics. For example, “the crime rate in Yucatán went from less than 46.2% in 2018 to more than 25.1% in 2019, a variation of 71.3 percentage points at the start of the current administration, diametrically opposed to the national average, which increased that same year. from 2.6% to 4%, a variation of 1.4 percentage points”.

Certainly, Yucatán remains safer than other entities, but the Yucatecan model of authoritarian policing has not been enough to stop the breakdown in security in that state. What is worse, adherence to this model would block the way to truly democratic, tried and successful alternative options.

The Casede study shows that the Yucatecan security model involves systematic torture, is authoritarian and involves systematic violations of human rights. It also indicates that these costs are not only too high in any society that prides itself on being democratic and humane. Finally, the study sheds an important light: the presence of this authoritarian model has not contained the deterioration and helps explain the breakdown of security in that state.

These conclusions would have to shake Yucatecan society. Although due to the low homicide rate in Yucatan it still enjoys enviable security for other states, its commitment to the authoritarian model is unfeasible. Consequently, its prolongation would be a sin that would carry its penance.

What path should Yucatan take to get out of this stagnation, reverse this deterioration and save itself from following the path of decomposition of states that, like Guanajuato, opted for the authoritarian model?

The Casede study is a diagnosis and, therefore, does not include an elaborate answer to this question.

Since I am not a scholar or expert on the subject, I am not in a position to present an original and informed answer. What I can do is go to the diagnosis of an academic who knows like few others about security policies and strategies in Mexico.

In the presentation of the Casede document, Dr. Sergio Aguayo proposed with the clarity and forcefulness that characterizes him a route to leave this model behind: the first thing that Yucatan needs is a comprehensive strategy that involves plural groups of civil society, such as universities, groups and organizations defending human rights.

For Dr. Sergio Aguayo, “the Yucatecans are making the mistake of disregarding themselves and believing that the heavy hand of the police and laws is enough to solve the problem. This is the worst thing a society can do; security is too important to be left to politicians, police and prosecutors ”.

Certainly, two things are clear after considering what was stated in the Casede diagnosis. Yucatecan society can no longer afford to continue to ignore it. And Mexico would be making a serious mistake if it seeks to import a security model like the Yucatecan one.