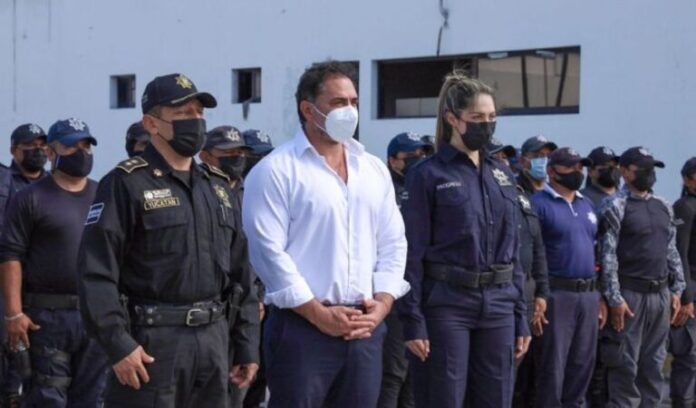 Progress, Yucatan; January 27, 2022.- Commander Omar de la Cruz Herrera Cocom was appointed today by Mayor Julián Zacarías Curi as the new director of the municipal police amid a barrage of criticism for having incurred in the crimes of excessive use of force, home invasion, and robbery, in 2016.

The new director of the port police corporation has 26 years of experience in public security and even received a Police Merit medal that same year for rescuing a woman who was kidnapped from a motel by two young men, however, he also has past criminal complaints against him such as 168/2016 brought by the State Attorney General’s Office.

In this, made up of files 588, 589, 591, and 595, de la Cruz Herrera was denounced for abuse of authority and excessive force together with the agent Benito Victoriano Madrigal, which led to recommendation 27/2020 of the State Rights Commission Humans from Yucatan (Codhey).

In that recommendation, Codhey asked the SSP to sanction the seven elements, including Commander Héctor Guy Freyre Núñez; order them to make the arrests in accordance with the law, to take re-training, and refresher course on human rights, and to compensate the victims.

Herrera Cocom enters to relieve Emilio Raúl Caamal Gutiérrez, commander “Cobra” of the SSP, who on Sunday, January 9 of this year, was arrested drunk in Mérida by the SSP, for assaulting a woman with blows and a pistol. He was dismissed the same day as police chief of Progreso, after accumulating citizen complaints of abuse since 2019.

“Rest assured, that this restructuring in the Municipal Police will help ensure that the work and effort of women and men, who take care of progressives and visitors on a daily basis, is directed with professionalism and integrity since its new directive has the necessary preparation to take on this assignment and be able to face the challenges that come their way,” said Julián Zacarías at the time.