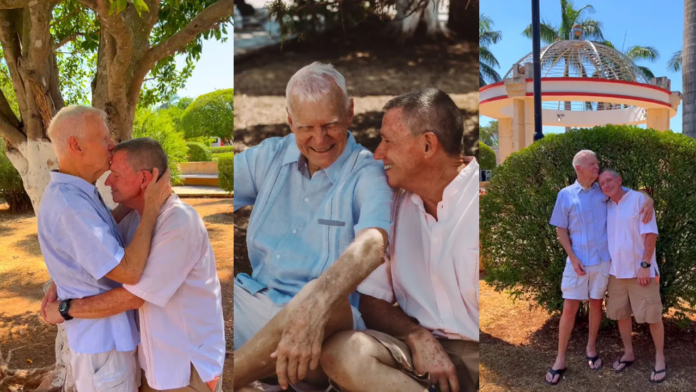 Henry Jiménez is a photographer who offered to take the photos.

The tender images moved the internet.

Henry Jiménez is known for sharing his work on social networks. On his Instagram account, he shares the result of his work, which consists of capturing photographs of people from all over the world during his stay in Yucatan.

On this occasion, Jiménez asked Fred and Chuck, a gay expat couple from the United States, to do a photoshoot in Ticul, the municipality in which they reside.

Fred and Chuck have been together for 30 years | Photo: Instagram @henryjimenz

“It was an incredible experience to capture the love of this beautiful couple. Thank you for allowing me to photograph them. Their names are Fred and Chuck and they live in Motul Yucatán,” the photographer wrote in a video he shared on Instagram.

The couple has been in a relationship for almost 30 years and their photos showed how in love they still are with each other.

The comments were not long in coming. For the most part, they celebrated the love that the couple professed and the quality of the photos taken by Henry Jiménez .

The History of LGBT in Mexico and Yucatan

Pete Sigal, an associate professor of history at Cal State LA, wrote a paper called “Gender, Male Homosexuality and Power in Colonial Yucatan” (linked at the end of this article). From this paper, we basically learned that male and female homosexuality was deemed a sin by the Spanish conquerors and that accusations of or rituals involving homosexual acts were used as shows of power over the conquered. Despite the conqueror’s mentality, the Maya culture is known for being accepting of sexual diversity, as noted in this Wikipedia article about the LGBT community in Mexico. There is even a Maya god, pictured to the right, named Xochipilli, who was called the Flower Prince, and is the Maya patron saint of homosexuals and male prostitutes… despite the fact that he was married to a human female named Mayahuel.

From Wikipedia, you can also get a broader picture of homosexuality in all of Mexico. And it is there that we found information about a formative event in the history of the LGBT community and Yucatan, the Dance of the 41 Maricones.

In 1901, despite the fact that sexual acts between consenting adults were officially legal now (thanks to the Napoleonic Code and the banishment of the Spaniards), other more general laws were used to arrest 42 men, half of them dressed as women, who were attending a ball in Mexico City. The scandal was well reported, and documented by a series of prints by Jose Posada that was widely circulated.

But if 42 people were arrested, why is it called The Dance of the 41 Maricones? We wondered that too! It turns out that the 42nd person arrested was the nephew of the sitting president of Mexico, Porfirio Diaz. That nephew, despite his involvement, was allowed to go free apparently, and only 41 arrests showed up on the books. As part of their punishment, after being made to sweep the streets of D.F. dressed as women, the arrested men were sent to Yucatan, where the Caste War was still going on. Well, apparently only half of the 41 men made it to Yucatan, that godforsaken place that we call home. It may be that this is the modern beginning of Merida and the Yucatan as a haven for the gay community.

Wikipedia notes that less than a year later, there was also a raid on a lesbian bar. But soon thereafter, events leading up to the Revolución hijacked the national attention and these scandals fell by the wayside.

In the 1930′s, when Mexico City was growing in international popularity, there were gay bars and baths in various sections of the city. Even during this time of incredible growth and open-mindedness… “Those involved in homosexual activity continued to live with their families. There were no homophile publications or organizations, so homosexual activity was practiced clandestinely or privately.” During World War II, there were about 15 or so gay bars in Mexico City, two of which allowed dancing. But after a grisly murder in 1959, the mayor of Mexico City closed down every gay bar in town.

Merida a Colonial City with a happening gay scene

The capital of Yucatan state, Mérida, has a thriving gay scene. The city’s ambiance is colonial and the climate is tropical. And it is close to famous tourist sites like the Mayan ruins of Chitzen Itza as well as to the beach resorts of the Riviera Maya such as Cancun and Playa del Carmen.