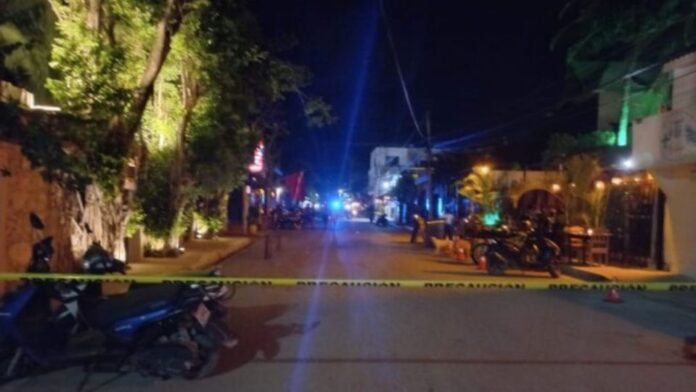 The blood still soaked this Thursday the asphalt of one of the main streets of the Mexican Caribbean paradise, Tulum.

On Wednesday night, while a group of five tourists was having dinner on a terrace of the local La Malquerida, some hitmen shot at other diners.

The bullets ricocheted off the foreigners. two foreign tourists were killed, the other three – from Germany and the Netherlands – were injured and are still admitted to hospital. The drug war has once again reached one of the tourist gems par excellence. The bullets remind us that in Mexico violence always finds a hole to sneak through.

The authorities point out that what happened in La Malquerida was a confrontation between rival drug trafficking gangs. And it has not been the only one this year. Although this paradise corner has managed to avoid the headlines of violence in other parts of the country and has been better known during the pandemic for its clandestine parties, freedom without masks, and visitors to a perennial Coachella, in this municipality bullets coexist with daiquiris.

The cartels fighting the area have encircled Tulum with frequent shootings. In March, another shooting at a taquería seriously wounded a Spanish tourist who ended up dying in hospital; and two days before, two more consecutive shootings that created panic in the only artery in the city, which connects with the rest of the cities of the Riviera Maya, and Centauro Street, where La Malquerida is located. In a stretch of fewer than 100 meters those days, cords of the Prosecutor’s Office were accumulating that ensured the evidence of the bullets and the blood. And on one side, a foreign tourist negotiated with an artisan 2,000 pesos for a colorful hammock.

Death and fun coexist in Tulum with astonishing normality. In May, one executed and one wounded on the same street, Centauro, at the La Barrita store; another Uruguayan national died in his room in the Aldea Zama residential area. In June, three men were shot to death on Paraíso beach. On August 8, local newspapers headlined: Bloody Sunday in Tulum. A man was killed by a shot in the neck on Kukulcan Avenue, very close to the above. And in September, a shooting at the Rosa Negra restaurant riddled a taxi driver and a security guard.

The case of Rosa Negra – a chain of restaurants in Cancun, Tulum and Mexico City – is also related to the hotel businessman Eduardo Beaven, owner of the businesses, who a week ago was attacked by armed men at the gates of the International Airport Benito Juárez, in the Mexican capital. The alleged gunman was killed by one of his escorts.

The drug war has reached Tulum as it did other times with other jewels of national tourism, such as Playa del Carmen or Acapulco. The shootings and murders in its streets threaten to hit the main source of income in this municipality of the Riviera Maya. In the State of Quintana Roo, where Tulum is located, tourism accounts for 87% of GDP.

Some of the residents consulted by phone this Thursday explain that the situation in the town has been unsustainable for a year. With the pandemic, many tourists saw Tulum as the only safe haven. Without a border control, nor just requirements to travel to Mexico, its beaches and hotels were filled with foreigners in search of the party and the eternal summer that in no way would they find those months in their countries of origin. And no one in Mexico is aware that where the party is, there is drugs, there is money, a cartel is strengthened and the battle begins.

The profitable drug business was joined by local elections in June, whose power vacuum usually provides an incentive for drug traffickers to fight for control of the plaza. In March, shortly before the departure of the previous mayor, Víctor Mas Tah (of the PAN, PRI and PRD coalition), narcomantas with threatening messages to the municipal police hung from beach palapas, to the curiosity of tourists, who felt they were living their own episode of Netflix. The new municipal president, who took office on September 30, Marciano Dzul Caamal (from Morena), has the challenge of preventing Tulum from running the same risk as other municipalities threatened by violence. “Safety is my priority. We will recover the peace that we deserve ”, said the president on his Twitter account after what happened this Wednesday.

Of the alleged hitmen in the attack in La Malquerida, only one of them has been arrested and shot. Given the questions from this newspaper, the Prosecutor’s Office has not wanted to provide more information on the number of aggressors involved or the gang to which they belonged. The Quintana Roo Public Security Secretariat has identified six criminal organizations in that territory: the Los Pelones cartel, the Bonfil cartel, the powerful Jalisco Nueva Generación Cartel, the Sinaloa cartel, La Barredora and Zetas Vieja Escuela.

The violence that keeps Mexico at historic levels, almost 100 homicides a day, has knocked on the doors of paradise. President Andrés Manuel López Obrador celebrated on Tuesday the 3% reduction in homicides in September (compared to the same period in 2020) but the levels of terror remain too high. And the impunity of almost all cases allows no corner of the country to be safe.

They are tourists from Germany, Holland and India. They also identify one of the aggressors as José L., originally from Veracruz, who was also injured

Imagen Noticias con Ciro Gómez Leyva reported last night that the deceased women dined on the site. One of them is a young woman from India identified as Anjali Ryot, who arrived in Tulum this week. She lived and worked in California, she was a travel influencer and in recent posts on her social networks, she is seen in hotels and bars in the area. Her last video was uploaded on Wednesday morning, on the beach of the Cielo Maya hotel. On Instagram she had more than 40 thousand followers and in some publications, she is seen doing castings for television programs.

The other fatality was identified as Jennifer Henzold, a young German woman who died in a hospital after the attack.