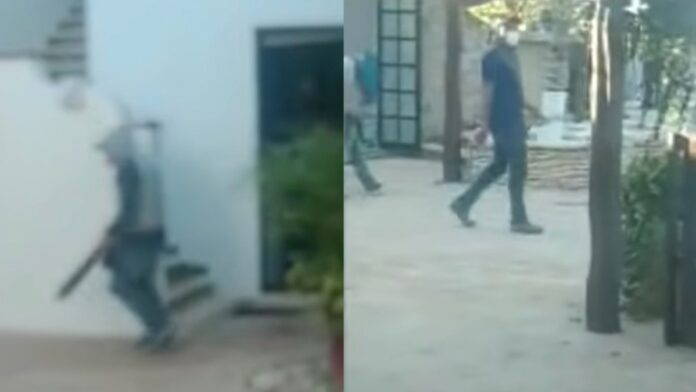 A foreign family is experiencing moments of anguish in Yucatan after a group of hired thugs keeps them ‘ kidnapped ‘ inside a summer property.

The summer estate is located on the Telchac Puerto-San Bruno highway in Yucatan.

As reported in La Verdad Noticias, Joe Lousi Zamora and Janet Anne Sanders were threatened and “kidnapped” by a group of 30 people who came to the house called ‘Caviar’, who has signed a five-year contract.

The men, allegedly hired by the Polish woman, arrived at the scene and cut the electricity and internet cables, and presumably keep the tenants kidnapped, who through social networks asked for help to be rescued.

Through a video that has been circulated on social networks, you can see the coup group that has besieged the place and threatened the tenants, who remain sheltered inside the property.

According to what could be ascertained, the thugs were hired by the husband María Gabriela del Rosario Cornelio Ojeda and polish expat Adam Kowalski Zurwski, who are allegedly protected by the State Police, since it is said that their lawyer is the son of the commander Marco Maya López of the Ministry of Public Security (SSP).

For his part, the lawyer for Joe and Janet stated that their clients were scammed by the owners of the property since they have rented the house for five years, they even stated that they made a bank deposit to the Polish expat Kowalski, for the amount of 222 thousand 650 pesos, which were deposited on March 23, 2020.

It is worth mentioning that it is not the first time that the owners of the house have done this, since on a previous occasion the couple came to the house and tried to remove their tenants, for which a complaint was filed with the Progress Prosecutor’s Office and turned a protection order in favor of Joe and Janet, however on Wednesday the owners of the property arrived at the house again and with the help of a group of criminals they intimidated the foreign family and their employees to get them out.

It transpired that the group of criminals caused damage to the house, as well as injured Janet and two employees.

Those affected, of American origin, have a rental contract that expires next April, but those who rent want to get them out sooner, without explanation, so they ask the corresponding authorities to support them.

The owners are said to be a Polish couple; they are divorcing and fighting over property

What has transpired according to victims

According to Janet Sanders statements

I never thought I would have something to post here – but funny how things change. On January 19th, my home was viciously and illegally invaded by Gabriela Cornelio and Adam Kowalski.

Several years ago, we entered into a long-term lease. We were instructed by Gabriela and Adam to work ONLY with Adam.

We paid our rent a year in advance.

On October 9th, Gabriela Cornelio and her lawyer Marco Maya showed up at our house with 20 men in an effort to frighten us and steal all of our belongings.

When the police arrived, Gabriela told the police that she did not know us, and we were “squatter” that had been there for approximately one month.

We showed the police our lease (signed by Adam) and our payment to Adam Kowalski.

At this point, Gabriela Cornelio lied again to the police and asserted she did not know her husband and the father of her two children.

It was then pointed out that all of the men that she had with her, were employees of Adam Kowalski’s.

Throughout this 12 hour ordeal, her lawyer, Marco Maya kept screaming, “Do you know who my Dad is?”

The next day, we retained counsel and obtained an Order of Protection. We also initiated civil and criminal actions against Cornelio and Kowalski.

Apparently unhappy with the result of their first attack and the Mexican legal system, on January 19th, these two criminals took the law into their own hands.

They showed up this time with 40 armed men -armed with machetes and pistols. They killed the animals and did more than 100,000 dollars in damage. They did this while Marco Mayas father, Comandante Marco Maya Lopez, Director del area de Antiextorsion y Secuestro de las Secretaria de Sguridad Publica del Estado — Literally this is the guy who is supposed to resolved hostage situations – The second attack, they held us, hostage, for over 20 hours – while the corrupt police in car number 6406 sat at the gate and protected the intruders. They would not let the locals in to help or the ambulance that was sent.

We are now embroiled in legal and criminal proceedings against this scum. The ironic part of this is that Adam Kowalski isn’t a Mexican citizen – He is a polish/American citizen.

Which now begs many questions –

How does an illegal immigrant, Kowalski own a business here?

Did he pay taxes on the 1.65 Million pesos he was paid?

Does the corruption in the police department now extend to their families as well?

Finally, on the afternoon of Thursday the 20th, the family of foreigners was evicted with the help of the State Police, however, their lawyer stated that they will file a complaint since their clients were swindled.

For The Latest Mexico News About Living, Working, Investing, or Retiring in Mexico Please Join and Share our Page Click Here