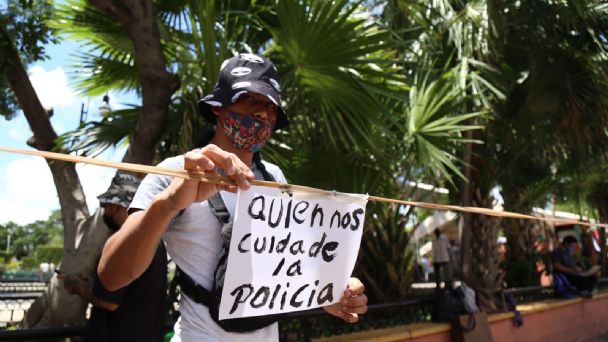 Renán Barrera Concha announced that the city council modified procedures and actions of the Municipal Police to strengthen respect for human rights in securing people, after the controversial death of the young man from Veracruz in July, raped and tortured by police officers.

The mayor of Mérida, Renán Barrera Concha, announced today that, as a guarantor of public safety and harmonious coexistence in the municipality, the city council modified procedures and actions of the Municipal Police to strengthen respect for human rights in the insurance of people.

The measure was adopted after the controversial death of the young man from Veracruz who died last July after being raped and tortured by police officers.

Today, the mayor assured that this modification to police procedures responds to the commitment to transform the municipal corporation into one that protects its community and is a guarantor of respect for human rights when fulfilling its duty.

He said that for this reason his staff was provided with the necessary tools to carry out their work and to use them properly.

The most important thing for us as an authority is to invest in each of the agents that allows them to concentrate on their work because they are the ones who have the most direct contact with citizens and who they turn to when they face a problem,” he added.

He explained that after a diagnosis of the organizational structure and internal procedures of the Municipal Police, the transformation began at the end of last year to maintain Mérida’s prestige as one of the safest cities in the country, as well as the high rates of perception of trust among the population.

The level of security in Mérida is recognized nationally and internationally and that is the result of the efforts we have made between the authorities and the police officers, which is why we are focusing our efforts on maintaining our public security with high standards,” he added.

He explained that among the first adaptations that were made, with the aim of improving the protocol during the securing of people, benches with seat belts were placed in 20 anti-riot units to avoid as little physical contact as possible with the detainees.

In addition, adjustments were made when arriving at the parking lot of the Municipal Jail where there are now two-step stairs so that the insured can get out of the vehicles in a safe, agile way and prevent a fall.

In addition, the corporation placed two waiting benches to prevent the detainee from standing before starting their physical review, collecting personal data, and protecting their belongings.

Another change is that there is now a wheelchair to transfer the insured person who is in an inconvenient state, avoiding as little physical contact as possible by the police and avoiding incidents when transferring them inside the Municipal Jail.

In addition, the Department of the Medical Service updated its registration forms for the insured, where the medical assessment is recorded, a detailed note of their physical condition at the time of admission, as well as other relevant data such as the consumption of substances, alcohol and health condition.

To ensure that the insured are aware of their guarantees, the posters listing the Human Rights of detainees were renewed, one being located in the waiting area and the other in the review area.

Three elements of the corporation intervene in this procedure, a doctor, the person in charge of the barracks, an analyst, a qualifying judge, and the police officer who makes the insured available to the Municipal Jail.

The mayor pointed out that in addition to the investment in infrastructure, the training of the corporation’s staff was increased, who have been given constant courses and workshops, including on human rights and the functions they have as guarantors of security. public.

The above, he said, so that they can know what they should and should not do during the insurance of a person or other actions related to their work.